How to unlock the Edge 47 Grip in Modern Warfare 2

How to unlock the Edge 47 Grip in Modern Warfare 2

Solve the mystery of this attachment 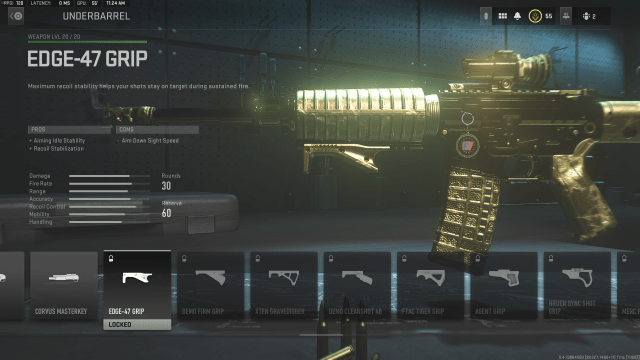 Provided by Activision Call of Duty: Modern Warfare 2 screenshot of the Edge 47 Grip.

In Call of Duty: Modern Warfare 2, there’s a whole new way of unlocking attachments. Instead of the traditional system where every single gun in the game unlocks the same attachments, guns now only unlock specific attachments. Some of these attachments are universally shared, meaning that they can be used across any gun in the game once they’re unlocked once. However, other attachments are unlocked across a Weapon Platform, which just means they’re shared with other guns in the platform. Throughout this system, players will be unlocking attachments by leveling up different guns. However, some Modern Warfare 2 attachments have no gun associated with them; the Edge 47 Grip is one of these.

If players look at the Gunsmith and go through the various attachments they can equip for their gun, a majority of them will likely be locked. This is because players need to level up most guns in MW2 to gain access to all of the attachments. As players are going through the list of attachments, they’ll usually see a gun and gun level associated with each. For example, one attachment will say “unlocked at Lachmann Sub level 12.” This means that attachment becomes usable once the Lachmann Sub is leveled up to rank 12.

However, some Modern Warfare 2 attachments — like the Edge 47 Grip — currently don’t have anything like that in their description. So how can players go about unlocking these attachments?

Unfortunately for players, there is currently no way to unlock the Edge 47 Grip in Modern Warfare 2. This is the same scenario as other attachments, such as the Slimline Pro Optic. We aren’t sure as to why these attachments are in the game at the moment if they can’t be unlocked. Perhaps this is simply a bug and Infinity Ward failed to associate the attachments with a specific weapon.

However, the more likely scenario is that these attachments are lying in wait for future guns. Maybe the Season 1 slate of guns will be required to unlock these specific attachments, giving a reason as to why they have no other gun associated with them.

Whenever the Edge 47 Grip does become unlockable, it could be a fairly popular attachment. It carries increases to aiming idle stability and recoil stabilization while reducing aim down sight speed. On an assault rifle, those pros and cons could be worth it, as rifles always need some form of extra recoil control.

Infinity Ward has not yet commented on the mystery behind the Edge 46 Grip or the Slimline Pro Optic. We’ll update you as soon as the devs say anything on the subject.