How to reveal the command symbol in Fortnite Season 8

How to reveal the command symbol in Fortnite Season 8

Help out Ariana Grande with another quest 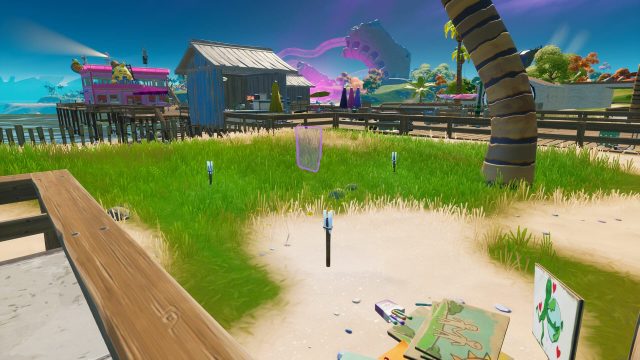 Provided by Epic Games The command symbol in Fortnite Season 8.

The newest addition to the expansive Season 8 list of Fortnite NPCs is international pop star Ariana Grande. After performing a concert in Fortnite earlier this year, Grande is now in-game as a world-class monster hunter. Like all other NPCs, she also has a full set of Punchcard quests that players can complete for Battle Pass XP. One of the more challenging quests in her set is revealing the command symbol somewhere on the Season 8 island.

This challenge is similar to the old Fortnite challenges, as players must find the symbol in the correct spot. From there, all that’s left is interacting with it and the task is complete. Of course, the tough part lies in where players can physically reveal the command symbol in Fortnite. The location of the symbol is found below.

Revealing the command symbol in Fortnite

While this specific Punchcard quest seems simple, it does require a bit of extra work. To start, players can jump off of the Battle Bus and head towards Weeping Woods. Players will want to land just in front of the large building, specifically in the center of the location. There are four other locations where that tablet will be but Weeping Woods doesn’t see a ton of traffic, which makes it easier for players.

Once there, players will see a transparent tablet floating in the air with three people doing poses in the middle of a bright light. To reveal the command symbol, players must replicate the pose that each person is doing. They must do this in front of each person with that particular pose.

If players have done everything correctly, the tablet will materialize and players can then interact with it. This will complete this specific Punchcard quest for Ariana Grande in Fortnite and players can then move on to the fifth and final challenge in her set, launching the signal flares.