How to get Tyranitar with Smack Down in Pokémon GO - Upcomer

How to get Tyranitar with Smack Down in Pokémon GO

Get a rockzilla with a solid Rock-type move 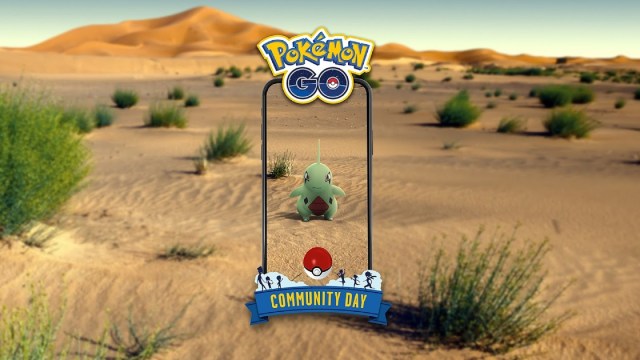 Provided by The Pokémon Company Larvitar will get the spotlight during a Community Day later this month.

During an upcoming Pokémon GO Community Day, Larvitar will appear more frequently in the wild. As a result, this special event will provide trainers with the opportunity to add the rare and powerful pseudo-legendary Pokémon Tyranitar to their collections.

Notably, this event will allow trainers to find a Tyranitar that knows an event-exclusive Fast Attack rather than its typical moves, Bite or Iron Tail. Here’s how to get a Tyranitar with Smack Down during the Pokémon GO Community Day.

How to get Tyranitar with Smack Down in Pokémon GO

The first step is to catch a Larvitar during the Community Day, which lasts from 2 p.m. to 5 p.m. in the player’s time zone on January 21. This should be fairly easy, since Larvitar will be extremely common in the wild during this time period.

Afterward, trainers will need to collect enough Larvitar Candies to fully evolve one of their Larvitar. It takes 25 candies to evolve Larvitar into Pupitar, then another 100 to evolve Pupitar into Tyranitar. However, trainers need to make sure to evolve their Pupitar by 7 p.m. on the day of the Community Day.

Any Pupitar that evolves into Tyranitar within this timeframe will automatically learn Smack Down as its Fast Attack. Smack Down has a base power of 12 in trainer battles; its power is boosted to 16 during gym battles and raids.

The fully-evolved Rock/Dark-type Tyranitar will then be able to pick among Fire Blast, Crunch and Stone Edge for its Charged Attack. With a Stamina stat of 225, an Attack stat of 251 and a Defense stat of 207, Tyranitar will prove to be a capable threat in any sort of in-game battle.

More details about the Community Day

For the typical $1 fee, players can obtain tickets to participate in the Larvitar Community Day Classic Special Research story. Players can also gift tickets to friends as long as they share a friendship level higher than Great Friends and the chosen friends haven’t purchased or been gifted a ticket already.

In addition, there are a few event bonuses that trainers can use to boost their motivation to hunt for Larvitar and obtain a Tyranitar with Smack Down in Pokémon GO. The following bonuses will be active during this event: