How to get the Sunwell for free in Hearthstone - Upcomer

How to get the Sunwell for free in Hearthstone

Once obtained, the Sunwell can be used to build decks. 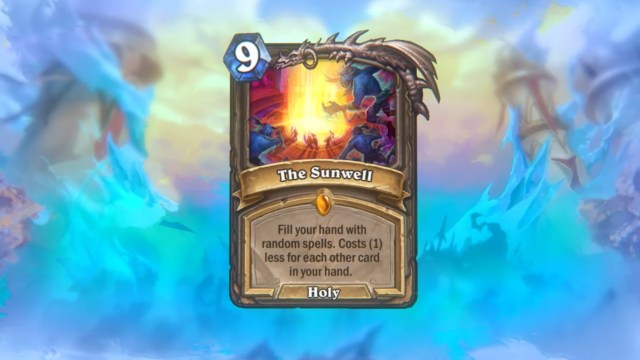 The next Hearthstone expansion is March of the Lich King, and it includes a bunch of exciting features. The expansion arrives on Dec. 6 with the Death Knight class, Undead minions, the Corpse mechanic, a new Runes deckbuilding system and Manathirst keyword.

However, Hearthstone players can get their hands on a free March of the Lich King card ahead of Dec. 6. Read on for the details.

How to get the Sunwell card for free in Hearthstone

Before the March of the Lich King launch, players can get the Sunwell card for free. This card is Hearthstone’s first-ever Neutral spell. As a Neutral spell, it’s not limited to a specific class. This means players can add the Sunwell to any class while building their decks.

To obtain the Sunwell for free, players simply need to log in to Hearthstone.

After Hearthstone patch 25.6, instead of logging in, players get this card once they open their first March of the Lich King card pack. The Sunwell is also limited to one per account, according to Blizzard.

How the Legendary spell works in Hearthstone

When the Sunwell is cast, it fills the player’s hand with random spells. These spells cost 1 less for each other card in their hand as well.

Hearthstone players don’t have to wait until the March of the Lich King release date to try out the Sunwell. Once the card is obtained, it automatically goes into the “My Collection” area in the game. Players can then begin creating decks with the card in it.

If players visit their card collection and click into the Sunwell, they can also look at some flavor text. The text reads,: “The Lich King had extinguished the light of the Sunwell once before — it will take all the might Silvermoon can muster to defend it!”

Lore in March of the Lich King

In addition to being a powerful spell from the March of the Lich King expansion, the Sunwell also arrives with some story. The Manathirst keyword and the Blood Elves within the expansion, in particular, are connected to the Sunwell’s lore.

“Manathirst represents the Blood Elves’ dependence on magical energies, and the main source of magical energy for them is the Sunwell,” Hearthstone Features Lead Chadd “Celestalon” Nervig went over in a video.

Celestalon added that the Sunwell is a great font of magical power that Silvermoon is built around. Silvermoon refers to the capital city of the Blood Elves.