How to get the Fire Emblem Engage Tarot cards - Upcomer

How to get the Fire Emblem Engage Tarot cards 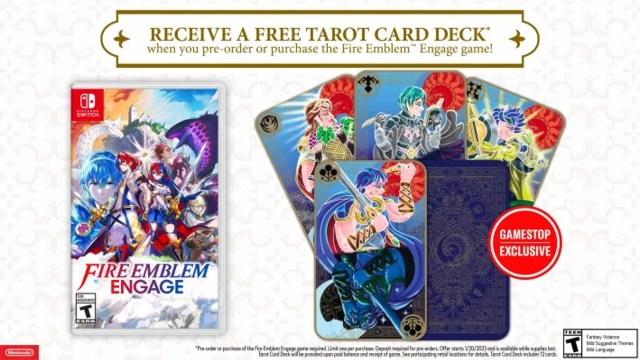 Fire Emblem Engage is the latest entry from the popular Fire Emblem RPG Franchise, launching today. The new series is a follow-up to Fire Emblem: Three Houses released in 2019. It also comes with 26 chapters and exciting battles, which has left players anxiously awaiting all the new content.

Just like the previous games before it, Fire Emblem Engage is giving fans the opportunity to purchase special edition items. Among these items include Tarot cards featuring various characters in the game. The cards are covered with Engage characters on a sky-blue background. The Tarot cards don’t hold any in-game value and can’t be traded within the game. However, they serve as a great art collection for any fan who loves Fire Emblem.

To get Fire Emblem Engage Cards, you need to pre-order or purchase the game at GameStop before its launch on January 20. This is the only retailer that is offering this exclusive pre-order bonus.

It’s also important to note that the cards are limited to one per player, so players won’t be able to pre-order multiple copies of the game.

We got our hands on the GameStop exclusive Fire Emblem Engage tarot card deck early! If you want to add this beautiful set to your deck collection, pre-order the game before its launch on January 20th.

Additionally, the card is not exclusive to only those who buy the divine edition of the game. This means that players that buy the standard edition are also eligible to get Tarot cards. Players buying the game in person will need to show a paid balance receipt at GameSpot to collect their Tarot cards.