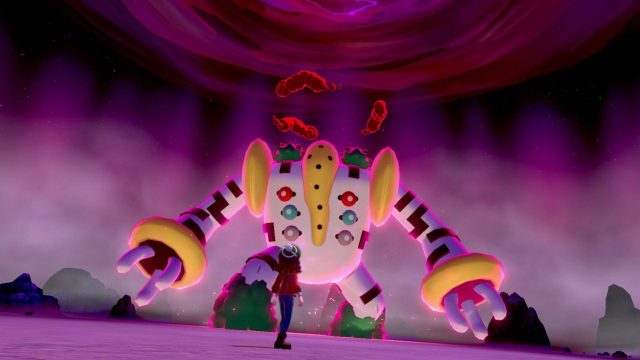 Regigigas, the final Regi Pokémon, makes its return to the franchise in The Crown Tundra expansion for Pokémon Sword and Shield. You can’t catch it without doing several other things first, however.

Here’s what you need to do to encounter Regigigas, where you can find it, and how you can defeat it and catch it for yourself.

How to find Regigigas

The first thing you need to do is get your hands on every other Regi Pokémon: Regirock, Regice, Registeel, Regieleki, and Regidrago. Using our Regi Pokémon guide, you can easily catch four of them on your own. Unfortunately, you can only catch one of either Regieleki or Regidrago per game. To get the other, you will need to trade with someone who has the expansion.

Once you have all five Regis, put them all in your party and fly to the Snowslide Slope. From here, head south into the Giant’s Bed and look for a Max Raid Den that has four rocks around it.

If you have all the Regis in your party, interacting with the den will cause a beam of light to shoot out. You can then face Regigigas in a Dynamax battle.

Regigigas is a Normal-type Pokémon, which means its only weakness is Fighting. Its ability, Slow Start, means that for the first five turns of the battle it will have decreased stats. You shouldn’t have an issue taking it out by then if you use Zacian, Zamazenta, or Eternatus. While they don’t have Fighting-type moves, their special moves will deal double damage to Dynamax Pokémon.

Once you take it down, you will always catch it regardless of what Pokéball you choose to use. So, make sure to capture it in your favorite ball!

Now that you have Regigigas, your Regi collection is complete and you can move on to the other Legendary and Mythical Pokémon the Crown Tundra has to offer.