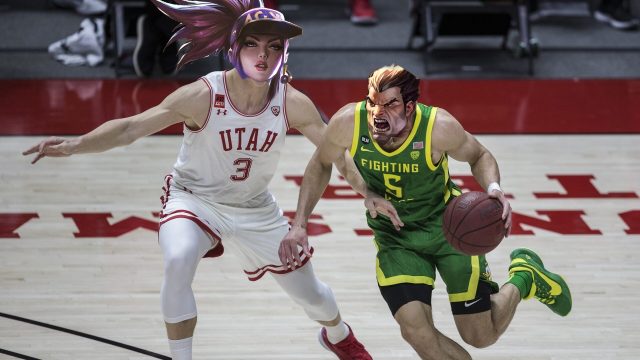 Provided by Chris Gardener/Getty Images, edited by Upcomer Sometimes it's hard explaining the hype around League of Legends

Every League fan knows that the League of Legends World Championship is one of the biggest events on the esports calendar. Some like to call it League’s Super Bowl, but, if we’re being honest, it’s so much more than that (even if we’re just talking about length). It’s a month-long celebration of the year-round efforts of some of the most talented individuals in any competitive game, period. And for experienced viewers, it’s where the season’s most compelling narratives and storylines reach their climax.

For the not-so-experienced viewers, though, the method of storytelling (the game itself) is nearly impossible to understand at first glance. That’s normal. People who haven’t tried something before probably won’t have the best understanding of it right away. That doesn’t stop fans from wanting to share that hobby or interest, but doing so is still undeniably difficult.

Let’s face it: even if you’re not watching finals with your family, the holidays are coming up, too. You’ll want to talk about the things you love with them, but you’re not sure how many more times you can explain to your Ivy-League-grad, older sibling that it’s pronounced UH-KAH-LEE and she’s actually a highly trained Ionian warrior initially raised under the Kinkou Order by its leader, Shen, the Eye of Twilight, who can see between the mortal and spirit worlds. Or that no, the outfits you bought for her don’t make her stronger, but they still have value, and buying them all wasn’t “a waste of money, Alex.”

Maybe that’s not your situation. Maybe you don’t just play League; but it’s somehow linked to your job. Either way, if you thought convincing people why watching others playing a video game is fun, imagine explaining to somebody that there are actually people who write about those games and the people that watch those playing them. Imagine.

Anyway, Worlds 2021 has certainly lived up to the high expectations placed on the event each year. In play-ins, we saw hype matchups between players and regions we rarely see clash. The group stage was filled with drama; stories of failure and redemption played out in full within a matter of hours on the day. And so far, the bracket stage has been as action-packed and competitive as ever. We’ve seen three five-game series already.

With people already heralding Worlds 2021 as one of the best in recent years, the upcoming final between Edward Gaming and DWG KIA on Saturday, Nov. 6 will definitely be one worth showing to people. But, how should you approach it when you’re the one responsible for doing the explaining? No worries. Between the spectacle of the opening ceremony and the games that follow, there will be a lot going on at the Worlds 2021 grand finals, and one of League’s biggest ambassadors is here to share how she navigates this situation: Riot Games’ Global Head of LoL Esports, Naz Aletaha.

In an interview on Oct. 14 where she spoke about her new position and vision for the future of LoL esports, Aletaha was asked a simple question: “how do you explain your job to people who know nothing about League?” Her answer was succinct and full of tips to make that conversation go as smoothly as possible for both parties.

“I always liken it to basketball, since that’s also five versus five and there are five specific roles on each team,” Aletaha said. “I think for most people, what’s the most confusing when you compare the game itself to traditional sports is that the scoreboard itself in terms of kills doesn’t necessarily reflect who’s 100% going to win, right? So I think explaining gold differentials and all that to people can sometimes be something hard for them to wrap their head around, initially. I love to put numbers behind it and say ‘look: our world finals are getting over 100 million people who are tuning in. I think when you apply numbers like that, they see the engagement.”

The classic “link everything back to traditional sports approach” might seem reductive, but it works. In order to explain League in a way that makes the most sense right away, it’s important to shift perspectives. You have to meet people where they’re at, which means describing the game, the fanfare and the glamour of the esport as a spectator rather than as a fan or player.

“Especially with anecdotes that compare it to the traditional sports world since most people have at least a baseline understanding of traditional sports, but a great example is the LCS, right? The LCS is the third most popular sport in the U.S. in the 18 to 34 demographic, so only the NFL and the NBA are ahead of them,” Aletaha said. “When you start to lay it out like that for folks, then you see the light bulb go off and they start to understand. But by far and away the best way to explain or to make believers out of people is to bring them to an esports event. Seeing is believing, and nothing can replace the electricity in an arena of cheering League of Legends fans. There’s just nothing like it.”

It’s no surprise that big numbers and huge stadiums will get people’s attention. The 2021 World Championship opening match between 2019 champions FunPlus Phoenix and 2020 champions DWG KIA on Oct. 11 peaked at 1.6 million concurrent viewers. That’s the type of number that can create fans when presented in the right way.

Worlds finals kick off on Nov. 6 at around 8 a.m. EST. Whether you’ll be at a casual watch party or at home with your family around, now you’ll at least be equipped to explain the spectacle of the Worlds 2021 finals thanks to the Global Head of LoL Esports’ tips. If it works for the person in charge of it all, it’ll probably work for you, too.