How to beat the Elite Four in Pokémon Scarlet and Violet

How to beat the Elite Four in Pokémon Scarlet and Violet

How to beat the toughest opponents in the Pokémon League 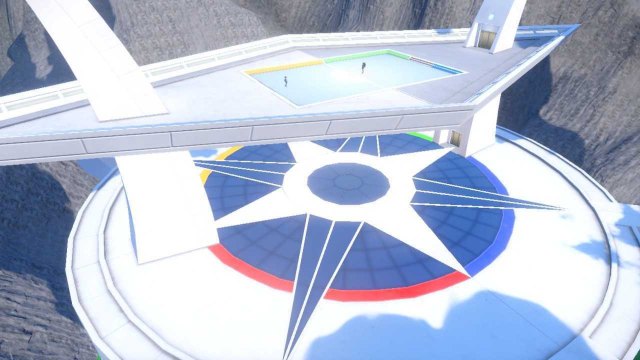 Provided by Michael Czar. The top of the Pokémon League in Pokémon Scarlet and Violet.

In Pokémon Scarlet & Violet, a familiar group of some of the strongest trainers known as the Elite Four stand before your path to becoming a Champion in Paldea.

Here is a quick rundown of each member of the Elite Four, with tips on how to beat each one. Keep in mind that this isn’t the final challenge before becoming Champion, as you’ll have to face the top-ranked Trainer in Paldea afterwards, Geeta, known by her nickname La Primera.

The Elite Four starts with a questionnaire

Throughout your journey to becoming a Champion in Pokémon Scarlet and Violet, members of the Elite Four pop in and out as fans watching your progression. One of the first that shows up is Rika, who also is the first one you see when you make it into the Pokémon League building.

Before any battles begin, to fit with the school theme the game has, you have to answer a questionnaire. You can fail it and retry as many times as you want, but here are the answers if you want to quickly get to the battles.

Q: How did you get here today? A: Walked

Q: Please tell me the name of the school you’re enrolled in. A: Naranja (Scarlet) or Uva (Violet) Academy

Q: What brings you to the Pokémon League today? A: I came to become a Champion

Q: Now, what do you intend to do if and when you become a Champion? A: I want to find treasure

Q: Which of the eight Gyms gave you the most difficulty? A: Any answer works

Q: And what was the name of the Gym Leader you faced there? A: Correctly say the gym leader for your previous choice

Q: Do you remember which type the Pokémon Gym Leader used? A: Correctly say the gym type for your previous two choices

Q: What was the category of the Pokémon you chose to be your first partner? A: Say the correct answer based on your starter Pokémon

Q: Remind me, what do you intend to do if and when you become a Champion? A: I want to find treasure

After all that is answered correctly, you move onto the next room, the battle room. You have an opportunity to heal and swap your party now, but the battles will start as soon as you enter the room. As you do, Rika also enters, as your first challenger.

Rika, the Ground-Type Trainer of the Elite Four

Rika reveals herself to be a Ground-Type Trainer, starting with Whiscash, a rare Water/Ground Pokémon. Here is the full list of Pokémon Rika has in this battle:

As is traditional in big battles such as this, Rika will Terastallize her final Pokémon; the powerful Clodsire. It shifts from a Poison/Ground type to a pure Ground type due to that. Be careful though, as it will still know powerful Poison-Type moves. In terms of what to run, if you have a strong Water-Type Pokémon, it can get you to Clodsire easily. Water is strong against Ground, and the only Pokémon that it doesn’t do at least double damage to is Whiscash. Even then, if you start with a Grass-Type Pokémon to get rid of Whiscash and then swap into a strong Water-Type one, you can get to Clodsire without much issue.

However, Rika’s Clodsire runs the ability Water Absorb, so Water Pokémon won’t get their value there. Swapping back to a Grass-Type or even an Ice-Type can help you finish off Clodsire and Rika.

Poppy, the Steel-Type Trainer of the Elite Four

After an opportunity to heal your team, the next Trainer you face is the young Poppy, a Steel-Type Trainer. Here is her full team that she uses in this battle:

Poppy’s ace in the hole is her Tinkaton, who she will Terastallize into a pure Steel-Type when you get to it. Where Rika needed some swaps, if you have a powerful Fire-Type Pokémon, it might not be needed. While other types like Ground and Fighting can work, they have some counters in Corviknight and Bronzong.

Larry, the Flying-Type Trainer of the Elite Four

After beating him to get his badge, Larry is back to check if you can be a Champion, this time with Flying-Types. Players might recognize Staraptor, his strongest Pokémon from the Medali gym battle. Here is the full team for this battle:

Similarly to Rika, while there are obvious type counters like Electric, Rock and Ice, you can’t run one throughout the whole battle. All of those types work for the first three Pokémon on Larry’s new team, but that’s when it fades off. Oricorio is Electric, so that would require a swap if you have that type. Plus, the Flying-Type Terastalllized Flamigo can one-shot Rock or Ice Pokémon with a Fighting-Type move. As long as you have someone with a Rock or Ice move, run an Electric-Type until Oricorio, swap it out for a Rock or Ice Pokémon, and then swap back to Electric.

Hassel, the Dragon-Type Trainer of the Elite Four

The fourth of the Elite Four is the art teacher from your academy: Hassel. Here is the full list of his Dragon-Type team:

Dragon is countered by Dragon, so a strong Dragon-Type can prove useful here. But, the other two types that counter Dragon, Fairy and Ice, might prove more useful in both dealing and taking damage. Baxcalibur will get Terastallized into Dragon-Type, but if you have a strong Fairy or Ice-Type move, you shouldn’t have much issue.

After defeating Hassel, your time with the Elite Four is done, but you’re not the Champion yet. Next up is La Primera.

Geeta, the Top Champion of Paldea

As is custom for Champions of Pokémon regions, Geeta has an extremely well-constructed team for Pokémon Scarlet & Violet, covering almost every type with six Pokémon instead of the five that the Elite Four ran. Here is the list for her team:

To counter a team like this, you need to match it in versatility and strength. Just make sure you’re either the same or a little stronger in level, and you have Pokémon that cover a wide variety of types. Looking to beat her team in particular, Ghost-Type Pokémon are good against half of them. As for her ace, Glimmora, it Terastallizes into a pure Rock-type, so prepare for that.

If you get through, congrats, you’ve beaten the Elite Four and are now a Champion in Pokémon Scarlet & Violet. Just be prepared for another rival battle afterwards.