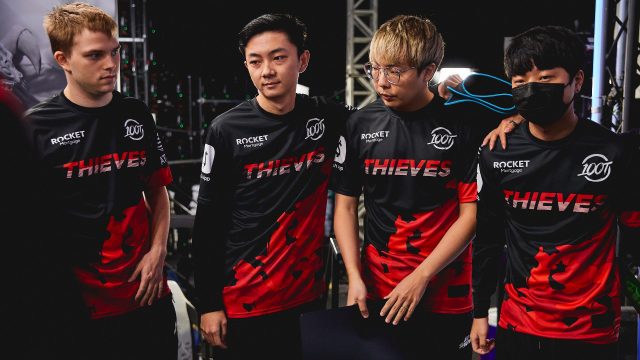 Provided by Riot Games 100 Thieves can try to do what Cloud9 did yesterday and here is how they can do it.

EDG can advance to the knockout stage even with an 0-3 record, as they would still have a good chance at playing in at least a tiebreaker game. Winning at least one game will confirm their spot in the Worlds 2021 knockout stage. This is because there will not be more than one team with a 4-2 record at that point. Winning two games gives them at least a tiebreaker for the first seed. Going 3-0 obviously locks them up at the no. 1 seed from Group B.

The League of Legends Champions Korea second seed are in control of their own destiny. After a 2-1 start, another 2-1 week will confirm them for the Worlds 2021 knockout stage. Going 3-0 would, at the very least, give them a tiebreaker for the first seed. At the same time, though, going 1-2 puts them in a little bit of danger. A one-win week would give them a good chance at a tiebreaker but for the last seed. Going winless doesn’t eliminate them completely but they will need the same miracle that happened in Group A to force a tiebreaker.

North America’s first seed needs to go 2-1, with a win against T1, to at least force a tiebreaker game. A loss to T1 would virtually eliminate them unless T1 loses their other two games to EDG and DetonatioN FocusMe. Even if that happens, the Thieves would still need to win their remaining two games which would result in both teams being 3-3. If the Thieves go 1-2 again, they will need a miracle for tiebreakers to happen. Going 0-3 will eliminate them from the tournament completely.

DFM will probably need to go 3-0 in order to have a chance at realistically forcing any tiebreakers. Unfortunately for them, even with a 3-0 week, they are still not in control of their own destiny. There is a world where a tiebreaker can be forced with a 2-1 week. But those two wins have to be against T1 and 100 Thieves and, at the same time, they need FPX to go winless and for the Thieves to go 1-2. But that exact scenario just happened, so anything is possible. However, going 1-2 or winless will eliminate DFM from Worlds 2021.

Fans can also look into further detail on the in-depth breakdown of Worlds 2021 qualification.