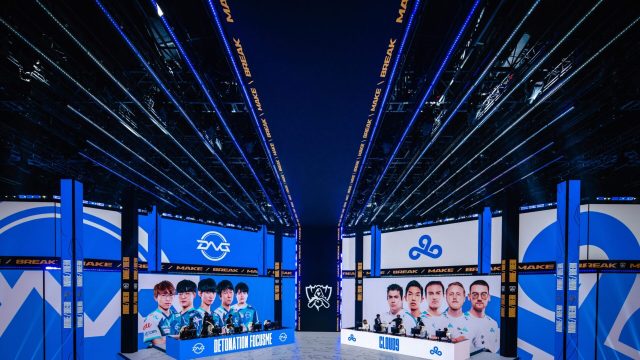 The League of Legends 2021 World Championship opener on Saturday was more of a cinematic experience than previous years, with long cuts, snappy transitions and a film-oriented presentation that lines up with developer Riot Games’ eventual release of “Arcane” later in the day.

The Worlds 2021 opening song is one example: It’s a set of four different shots that looks like one continuous drone shot following Vi through her descent into Zaun in an elevator. Upcomer spoke with Nick Troop, Executive Producer of League of Legends and Wild Rift Global Esports Events at Riot Games, and Matthew Kauth, Head of Production at London Alley, about how the Worlds 2021 opening ceremony was constructed, specifically the opening shot.

The opener to the song performance is a long, winding take that mixes real steady camera footage with technologically rendered blue screen animation. Troop explained the sequences in terms of stories, starting with Vi entering the elevator and continuing with her fall into Zuan as the camera circles around her. As she arrives at her destination, the camera moves through the city in an open market and flies past the citizens as they go about their days.

“We needed to be what’s in camera to not only be real but feel real,” Troop said. “The easiest way to make something feel real is to just build it.”

The first story with Vi is a set that was built for the opening ceremony. After that, the cinematic is a mixture of the two with animation throughout to make the transitions as seamless as possible.

“Everything from the sheep and the physical detailing, down into paint selection and streaks and how it’s applied and even things as minute as where there’s fabric,” Troop said, were taken into account. “Watching somebody with a paintbrush the size of a toothbrush hand-paint in highlights on the fabric so it doesn’t look like fabric from our world but looks like fabric from the world we are trying to put in the camera.”

Kauth said the first two stories are authentic despite how fantastical it all might look.

“Everything, every cart, everything there is practical and in 360 degrees on that set,” Kauth said. “If you stood in the middle of it and kind of spun around, there is set all around you. There’s no opening for like where a camera would go. It felt like a very immersive feature film set we were shooting on.”