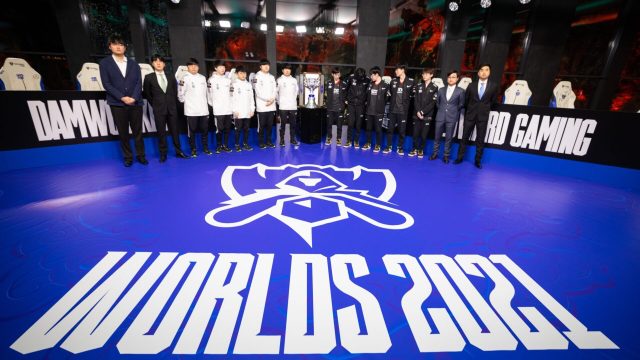 Provided by Riot Games DWG KIA and EDG meet up before the finals for a press conference.

The League of Legends 2021 World Championship is coming to a close as DWG KIA and Edward Gaming are about to face off in a final battle to determine the winner of the 2021 season. Both teams have earned their way to a finals spot by leaving the group stage and fighting through two other best-of-five series.

With all of those games combined, fans and analysts now have enough data to parse through who may have the advantage coming into the ultimate League of Legends series of the year. While statistics in League of Legends are often compiled in the background, without the needed context for how they impact teams and players, the numbers can often confirm or deny certain bases. This is how each position of both teams stack up against each other statistically at Worlds 2021 throughout the tournament.

From purely an eye test perspective, Kim “Khan” Dong-ha is having the tournament of his life. From lane presence to teamfight prowess, Khan has shown he is looking to win a championship trophy. Li “Flandre” Xuan-Jun, on the other hand, has not had as impressive of a showing at the tournament. This line of thinking is also backed up by the numbers. Khan has a better KDA (Kills/Deaths/Assists) than Flandre (3.5 to 2.8 respectively), but they also have similar laning statistics. Both have similar creep score per minute, at 8.6 for Khan and 9.4 for Flandre. But Khan has averaged ahead in gold and experience at 10 minutes, despite not taking as much farm as Flandre on average.

The DWG KIA top laner averages 336 gold and 310 XP ahead of his lane opponents at 10 minutes. This does signal a slight skew of the numbers, possibly because DWG KIA have stomped through every team they have played until the semifinals. But, Khan has oppressed his lane opponents in tandem with his jungler Kim “Canyon” Geon-bu with ganks and early dives. This means his laning stats are indicative of a player that wins through killing his lane opponent and not steadily outfarming them.

Flandre still averages ahead in laning statistics. He normally leads in gold and experience at 10 minutes, but not to the extent of Khan. Their damage numbers at Worlds 2021 are also strikingly similar, with Khan averaging 546 damage per minute and Flandre averaging 545.

For this upcoming matchup, Khan has the advantage.

Canyon has also seemingly been unleashed at Worlds 2021, statistically and performance-wise. He has a better KDA than his Edward Gaming counterpart at 6.6, compared to Zhao “Jiejie” Li-Jie’s 4.2. The rest of the numbers for the two players are similar, largely because junglers and their performances are judged more on presence, objective control and pathing more than gold or kills. But, one interesting note from both players numbers is how much Jiejie is farming on average compared to Canyon. Jiejie averages 171 gold and 245 XP ahead of his enemy counterpart over the course of the tournament. Canyon has averaged ahead only in the double digits, up 85 gold and 92 XP at 10 minutes.

These numbers, plus Canyon’s kill totals, show that the jungler is more proactive in the jungle than his EDG counterpart. While Canyon is making plays around the map in the upcoming series, fans should expect Jiejie to invade his jungle camps and prioritize getting himself ahead and starving Canyon from his jungle.

While this matchup is more of a stylistic difference, and thus hard to compare directly, Canyon should have the edge in this matchup because of his great performances so far and proactivity around the map.

Lee “Scout” Ye-chan vs. Heo “ShowMaker” Su should be the marquee matchup going into this final series. Both South Korean players have put their names in the history books of League of Legends esports and this matchup could define their careers for years to come. According to the numbers, ShowMaker has had the better tournament run so far and should continue that success into this series.

ShowMaker blows Scout out of the water in terms of KDA and kill participation with an 8.4 KDA and participating in 71% of his team’s kills. Scout has earned a 5.3 KDA throughout the tournament and participated in 68% of his team’s kills at Worlds 2021. In terms of laning numbers, both players have an edge over each other in one statistic or another. ShowMaker leads gold difference at 10, averaging 166 gold ahead, while Scout leads the matchup in XP at 10 minutes and creep score difference at 46 and 4.4 ahead, respectively.

But ShowMaker again leads the matchup in terms of damage for his team. The spectacled mid laner boasts 27% of his team’s overall damage and 29% after the first 15 minutes. This is all while receiving the same amount of resources as Scout. They both average 23% of their team’s gold share.

ShowMaker clearly has the advantage going into the matchup as he is his team’s main carry. While Scout leads in a few laning statistics, ShowMaker is often roaming and making plays for his team. This explains why Scout would average a tad more ahead at 10 minutes. Statistically, at Worlds 2021, ShowMaker has been the better player. We’ll see if his performance continues for DWG KIA at the Worlds 2021 Finals.

Jang “Ghost” Yong-jun and Park “Viper” Do-hyeon have had similar Worlds 2021 runs so far and have the same function in their teams. Ghost normally plays with his support duo and stays in lane, then sticks with his team in the middle and late game. Viper is sometimes left on an island in the early parts of the game. But, he is a teamfight bot laner and stays close with his team to pounce on picks in the mid game or while his teammates are split pushing.

Ghost currently has the lead in KDA with a 6.0 scoreline while Viper takes the crown in damage and kill participation, partaking in 68% of his team’s kills and doing 26% of his team’s overall damage on average. In lane, Ghost leads Viper in gold and XP difference at 10 minutes, averaging 82 gold and 84 XP ahead. Viper, on the other hand, averages down gold and experience at 10 minutes. Viper has a high average damage per minute, with 505 damage compared to Ghost’s 438.

This matchup is also a difference in style and showcases how the teams prioritize their bottom lane. Viper is normally laning alone or fighting with his team around the dragon pit, while Ghost sticks with his support and tries to get an early lane lead. They also get about the same amount of their team’s gold (25%), so neither are prioritized farm.

Viper may have the edge in this matchup, thanks to his consistent damage output and readiness to move forward in a fight. Ghost would rather sit back in a front-to-back teamfight and gain his advantage during the laning phase.

Of the two supports, Meiko may have the edge in the matchup, specifically because he roams more often and times them better with his team. This again points to a stylistic difference, but Meiko has more impact across the map on average than BeryL.

The two titans of League of Legends will face off on Saturday and the winner will earn the crown as the best team in Season 11.

All statistics and numbers provided by Oracle’s Elixir and Games of Legends.