"Hopefully you can remember my name": CFO's Shunn aims to leave his mark at Worlds 2022

“Hopefully you can remember my name”: CFO’s Shunn aims to leave his mark at Worlds 2022 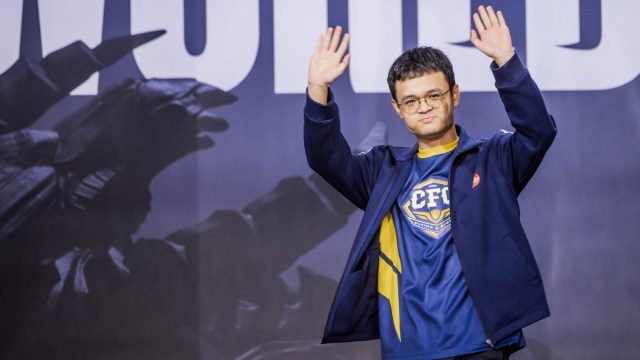 As a true rookie with no recorded professional experience before being scouted by CFO management back in the spring, Shunn has been the aggressive young gun in their bot lane that the team of world championship veterans needed. And through the first three games of the group stage, he is trying his hardest to leave his mark on the world.

In his first ever international game, albeit against 100 Thieves, Shunn turned heads by going 10/0/1 on Kai’Sa in an absolute masterclass on how to play a hyper carry champion. He has continued to play hyper-carry champions in the next two games piloting Tristana and Kalista, two champions that love to get up close and personal with the enemy team. Shunn said that this meta in particular is in his wheelhouse because he plays fearless but also noted that he is able to play confident because his team has his back.

“I have very good synergy with [my teammates] and I learn a lot from them in games,” Shunn said. “Alongside with my very strong confidence, all of these elements helped us make it to Worlds.”

Shunn mentioned that he is very lucky to make it to Worlds in just his rookie year and cited his teammates once again as to why he is here in the first place. CFO’s starting roster outside of Shunn has all been to Worlds before. Although the rest of his team knew what to expect when it came to playing on the world’s stage, Shunn only had ideas in his head. But like all players getting their first-ever matches in at Worlds, Shunn said he’s been taking notes.

“It’s pretty similar to what I expected for the matches on stage at Worlds I said I will watch all the games from all the other regions, they’re all very strong and I’m learning a lot,” Shunn said. “They are all very excellent players.”

As for players he has learned the most from, Shunn said he is particularly fond of T1’s bot laner Lee “Gumayusi” Min-hyeong and hopes he can have a chance to square off against him.

“I think his personal mechanics are the best and personally I love his playstyle,” Shunn said.

While nothing is concrete, it is possible for CFO and T1 to face off later in the tournament but to even get a chance, CFO have to pick up the pace in their group as they enter the second round robin a game behind the second seed. Shunn obviously knows this.

“We have to improve especially during our laning phase and also our [decision making when it comes to team fights],” Shunn said. “[Against Gen.G] we left Caitlyn open which was a very overpowered champion that put us behind in the actual game.”

With all that said, Shunn is still confident in himself and his team to put everything together for a deep run at Worlds and even though he is a rookie, he doesn’t present himself as one both on and off the rift.

“For readers in NA, hopefully you can remember my name is Shunn.”