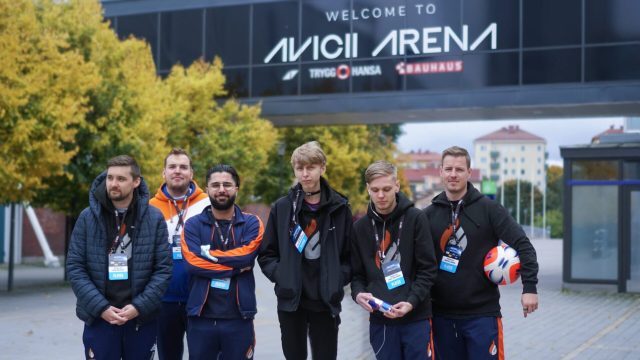 by Coby Zucker
[addtoany]
On the Ground

Rasmus “HooXi” Nielsen, the in-game leader for the Copenhagen Flames, is all in on the 2021 PGL Stockholm Major, saving thoughts for the team’s future until later.

The Flames organization is currently fielding offers for the purchase of their Counter-Strike: Global Offensive roster. Historically, the org hasn’t been able to hold onto their players for lack of capital to pay them fair salary. But HooXi isn’t sparing thoughts for money and contracts. His only goal is helping his team continue their extraordinary run at the major.

“For me, money, new contracts, other bigger clubs don’t matter at all,” HooXi said. “I just want to play and I just want to win. The best way to do that is to put your full focus on that.”

The Flames just qualified for the New Legends stage of the major after going 3-0 in their matches in the first two days of competition. They beat BIG, as well as Danish rivals Astralis and Heroic. The flawless run was not expected from the team, who were rated 14th in the world at the start of the major.

“It’s amazing to beat the teams we have beaten and qualify 3-0,” HooXi said. “We couldn’t have asked for a better way to do it than to beat, especially, Astralis and Heroic. I’m just insanely happy.”

“I feel weird when I beat my old teammates,” he said. “You want to see them succeed but, at the same time, there has to be a winner and a loser, right?”

The Copenhagen Flames aren’t just beating stronger teams; they’re doing in with their own style. Their aggressive CT sides set them apart from other Tier 1 teams. In post-plant situations where they’re even or down a player, the Flames aren’t afraid to spit at the odds and go for the re-take anyways. According to HooXi, it’s a style that developed naturally during the roster’s five months playing together.

“I think we have really good chemistry on the team, and synergy as well,” HooXi said. “So, when a teammate goes in, it’s just a natural reaction for people to help and that might create a faster tempo than other teams.”

The IGL also credits one of the PGL Major’s breakout stars Fredrik “roeJ” Jørgensen for leading the charge on the CT sides.

“RoeJ is a CT specialist,” HooXi said. “He has always been really good at playing his positions and reading the opponent and knowing what’s good to counter.”

While some were surprised by roeJ — who is sitting on a 1.36 HLTV rating at the event — and his performance in the Challengers stage of the major, HooXi was not. The Danish IGL thinks people forgot that roeJ was a star player, because his aggressive playstyle and dip in performance during his tenure on the MAD Lions led people to believe he’d been relegated to an entry fragging position.

“This is my third time on Copenhagen Flames and the first time… he was also the star player and he was also playing all the same spots he is now,” HooXi said. “For me, he’s always been a star player, so I’m not surprised at all. I think at IEM Fall he underperformed in the group stage. And, in the playoffs, you really saw what roeJ was capable of. Now, he’s showing it again.”

Now that the team has qualified for the Legends stage, which begins on Oct. 30, they have two days to prepare. They said they plan to spend the night relaxing and celebrating their wins before beginning practice tomorrow.

The Copenhagen Flames are a team that has to continuously adjust their goals. First, it was their goal to crack the top twenty teams in the world. Then, it was to make the major. Now, the Flames have to reassess as they head to the Legends stage to play against the best teams international CS:GO can field.

HooXi said that the teams wants to gain as much experience from the event as possible, their main expectation being to learn and grow from the major.