Pick your favorite starter or choose all three 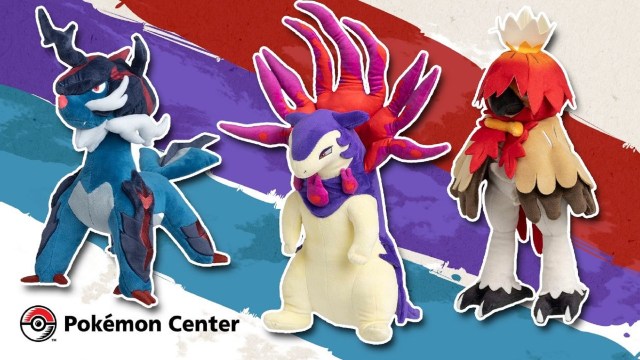 Provided by @Pokemon via Twitter Each of these fully-evolved starters received a new form with a new secondary type in Pokémon Legends: Arceus.

The Pokémon Company announced Tuesday that Poké Plush for each of the fully-evolved Hisuian starters are now available for purchase online on the Pokémon Center website. They are the latest in a set of toys based on Pokémon Legends: Arceus, which launched on the Nintendo Switch in January of this year.

Which will join you during your adventures in the Hisui region?

In Pokémon Legends: Arceus, trainers are able to pick one of three starter Pokémon, all of which debuted in different regions. The options are Oshawott from Unova, Cyndaquil from Johto and Rowlet from Alola. While their mid-stage evolutions remained the same, each of them received a different fully-evolved form in the Hisui region.

Now, plushies of each of the Hisuian starter final evolutions are available for players to buy through the Pokémon Center. Pokémon fans can choose to get the Water/Dark-type Hisuian Samurott, the Fire/Ghost-type Hisuian Typhlosion or the Grass/Fighting-type Hisuian Decidueye.

How much do the Hisuian plushies cost?

The Hisuian starter plushes are available on the Pokémon Center website for $39.99 a piece. This makes them the most expensive of the eight stuffed Pokémon that come from Pokémon Legends: Arceus. The other plush from the Hisui region range in price from $19.99 to $35.99.

Here are the other plushies from the Hisui region that Pokémon fans can purchase online:

Although the Pokémon Center has listings for Cyndaquil and Rowlet plushes, both of them are currently sold out. Meanwhile, Oshawott is the only one of the unevolved Hisui starters that is available for purchase online.

Likewise, there are no listings for any of the mid-stage evolutions besides Dartrix, which is also sold out at the moment. As a result, fans shouldn’t expect to obtain plushies of the full evolutionary line for each Hisui starter any time soon.