Heroes that you must practice to boost your MMR 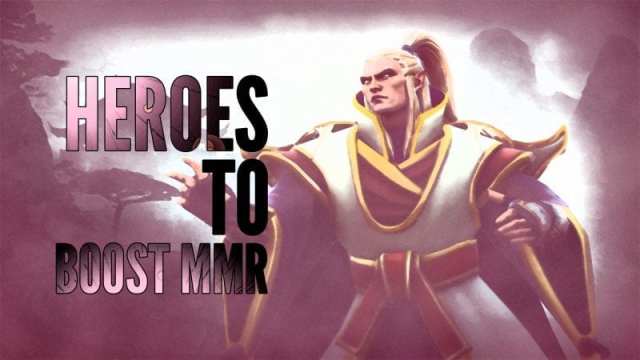 Best heroes you must try for Ranked matches

Disclaimer: Here’s a tried and tested list of heroes suggested for practice(in normal games) to boost your MMR.

Earth Spirit is definitely hard to use and we rarely see this guy on pub matches because of his complicated skills but we always see this hero in pro scene(usually from Jerax and Tims). Well, given that this hero is hard to deal with, but if you are good and able to land his skills you can easily initiate and go for roams that can eventually turn into ganks. He’s a complete package support hero, he has stun, slow and even silence enough to disable enemies. Aside from that his ultimate skill which is Magnetize can give a burst damage into clashes. His rolling boulder can allow him to get in and out in clashes that made him reliable and hard to catch. Practice this on pub matches and you’ll be ready to gain some MMR in rank matches.

Some are saying that the key to have a good mmr calibration is to spam Meepo during your pub days. And it’s true, Meepo is worth to practice in normal matches(Abed is the living proof) because it can lift your mmr when you are good enough and way close to professional user of this hero. Its undeniable that Meepo is hard to to use since you need to be aware because if one clone of him died, his hero himself will die. Your hands must be fast too, this hero is know for solo hero pick-up. You must be wise and active in able to escape and getting into clashes. Practice makes perfect, it may take time for you to perfect this hero, but it’s certainly worthy.

One of the best and fairest hero in my opinion. This hero isn’t that complicated to use, once you perfect all his skills. He can easily get a kill but can easily be killed as well that made him fair as a DotA hero. What made him exceptional is his ability to be effective in clashes, because he can disable enemies, drain their mana and even choke them/him with his cold snap. He has burst damage enough to kill supports instantly even cores. In addition, he’s hard to gank in late game, he can easily escape death because of his tornado that will allow you to walk away or use Ghostwalk that will allow you to invi and will give you a chance to teleport. If you think that he’s the most hard hero to use, you will doubt it once you memorized all his skills. His skills have a specific situation where you can use it more effectively, you need to be smart while using his skills. That makes him extra special.

This hero is one of the most versatile hero in DotA 2, he can be a support, offlane or even a core. You’ll probably need this guy to boost your mmr with his ability to gank and hold heroes during clashes. Why? His 2nd skill which is stun can disable heroes, his 1st skill enable him to walk faster that can phase even creeps which makes him to engage easily and run fast. Talking about his ultimate, it reduces huge enemies armor means your opponent will be softer and more fragile in clashes. When you’re lucky his 3rd skill can be a great skill and can cancel channeling spells  or even teleportation scrolls. This hero is easy to master, yet very effective in all matches.

Yes, this hero might be easy to use, but how sure you are that you’re using it right? Vengeful spirit is a dominating 4th role support. She can adjust on clashes and initiate easily with her ultimate,  nether swap. She can lessen her enemies damage and armor with her passive 3rd skill which is wave of terror. Disabling enemies with her stun while dealing heavy damage as well. In the late game, she can be a carry too. Her high damage and her Wave of terror were a great combination to carry the game.

Not only that Ogre is a very tanky hero for a support but he also has Blood Lust which makes any carry scary. Chances of nuking with Fireblast and multi-hero slows with Ignite is enough control during a team fight as well. Ogre has a very simple learning curve and he can work around multiple item builds based on the given enemy draft. By making all carries stronger due to the attack speed buff, Ogre is a simple solution when an MMR match calls for an emergency role 4 or 5 support.

These heroes will help you to stop the negative sign beside the 25. Practice these in normal matches, or else you’ll ruin your MMR. This might not work at the earliest, but you know, practice makes perfect!

Notes: This is just a suggestion, your skills will dictate your MMR.