Heesu picked up by the Toronto Defiant - Upcomer

Heesu picked up by the Toronto Defiant 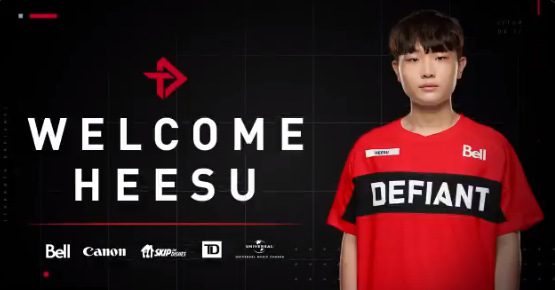 The Overwatch League signings are coming in quickly now. The Toronto Defiant have signed Korean flex DPS Hee-su “Heesu” Jeong, formerly of the Philadelphia Fusion and RunAway. After signing former Fusion main tank Su-min “SADO” Kim, it seems Heesu has followed him to the Defiant’s roster. This leaves the Defiant only looking for an off-tank and projectile DPS player to complete their roster for next season.

We’re excited to announce that @HeesuGOD is joining the Defiant DPS lineup for the 2021 season, pending League Approval! #RiseTogether pic.twitter.com/sV0CYImINO

To start, Heesu has been a highly touted prospect ever since his time in Korea. He played for two well established teams in both Element Mystic and RunAway. On the latter team in particular, he stuck around for three seasons and a Gauntlet run before signing elsewhere. In that time with RunAway, he helped lead them to two first place finishes, and a semi-final one on the third. His play on McCree and Sombra were key to those victories, and the Philadelphia Fusion needed to fit that hole on their team.

The Fusion signed Heesu last year, and he instantly made an impact. His play on Sombra in particular is what led the Fusion to some giant wins against tough opponents. However, much like Sado, the team couldn’t ever win the tournaments, finishing second place many times. This led to a small retooling, and along with head coach Dong-gun “KDG” Kim and Sado, Heesu was released. But, Toronto picked KDG up and heard his appreciation of his former teammates, helping them get onto the Defiant.

Much like I’ve said with previous Defiant signings, the roster is truly almost together. With this particular signing, Toronto looks like a team that can truly compete sooner rather than later. Heesu in particular is a young rookie who showed his talents in the league last season, but still can grow. While experienced from Korean Contenders, his true potential hasn’t been truly reached yet. And while the Fusion last year might’ve made Heesu and Sado look better than they are, it’s a risk worth taking for a Toronto team that has been bottom of the league for two years straight. Simply, this move makes the Defiant better, and we’ll see how their roster looks completed most likely soon as well.