Hearthstone's latest expansion Madness at the Darkmoon Faire is live

Hearthstone’s latest expansion Madness at the Darkmoon Faire is live 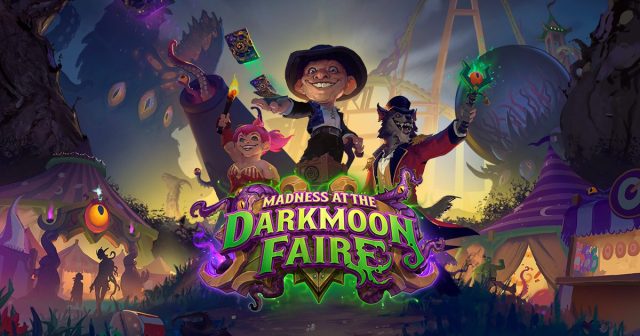 The final phase of the Year of the Phoenix is here with Madness at the Darkmoon Faire, the latest Hearthstone expansion. 135 new cards are joining Blizzard’s TCG, introducing the new keyword Corrupt, new Old God artifacts, and more to the game. World of Warcraft fans will immediately recognize the Darkmoon Faire as the monthly festival hosted by Silas Darkmoon. While ring toss, Whack-a-Gnoll, and the Firebird’s Challenge won’t be in Madness, there are still plenty of exciting and terrifying new cards coming to Hearthstone.

The Old Gods return in Madness at the Darkmoon Faire

C’thun, N’Zoth, Yogg-Saron, and Y’Shaarj are back in Hearthstone with Madness’ release. These Lovecraftian-based Old Gods cards each fit into a unique deck archetype, with a Battlecry to match. Each of the four Old Gods cost ten mana and come with a signature spell that is a reference back to their original printings.

The other new feature coming to Madness at the Darkmoon Faire is the keyword Corrupt. Cards with Corrupt upgrade when you play a higher cost card while they’re in your hand. Corrupt cards reward players for holding back cards until later in the game where they turn the tide of a match. Generally speaking, cards can only be Corrupted once but cards like Horrendous Growth can be Corrupted repeatedly.

Progression and rewards are also getting a rework with the release of Madness at the Darkmoon Faire. A new 50 tier Reward Track with new Hero skins, card back, tavern tickets, and more. With a highly requested achievement system launched it is better than ever to play and experiment in Hearthstone.

With the release of Madness at the Darkmoon Faire also comes the first season of Duels. This new game mode has players selecting a Hero, a Hero Power, and a treasure and building a 15 card deck around those cards. Players will take their decks and face off against live opponents in a Dragon Run-style mode. After each match players will get the opportunity to add minions, spells, and more treasures to improve their deck.