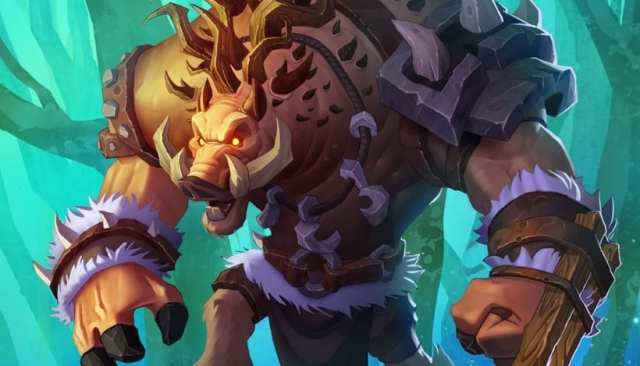 With the Hearthstone Wild Open running this month, it is the best time for you to try out the Wild format. Throughout the month we will be bringing you the easiest-to-understand guides to Wild’s most popular decks. Today we want to bring you Odd Rogue. Odd Rogue has been consistently one of the best decks in the Wild format since its release around nine months ago. The main reason to play Odd Rogue over other forms of Tempo Rogue (minion-based Rogues) is the upgrade to your hero power that Baku the Mooneater brings. A 2-mana 4-damage weapon is incredibly strong compared to other weapon tools in Hearthstone.

The staple cards of Odd Rogue are Vilespine Slayer, Hench-Clan Thug, and Baku the Mooneater. These cards are the most important tools in both Standard and Wild versions of the deck and are unlikely to be replaced anytime soon. The reason we included Baku as a key card this time around is that Tempo Rogue used to be a deck in the Wild format before Baku came around. However, Baku has been an amazing improvement to the deck.

Vilespine Slayer speaks for itself. With so many 1-mana cards to combine it with, there is almost never a time you are unable to use it effectively. The same goes for Hench-Clan Thug; its strength lies in the almost guaranteed improvement to 4/4 in stats on turn 3. This is because of the strength of the hero power of Odd Rogue. The game plan is almost always to use your hero power on turn two, which is not something many other decks in the game consistently do.

The final card we consider as a staple is Dark Iron Skulker. A card I was one of the first to include in Odd Rogue back in the day is now played in (almost) every single build of Odd Rogue. Dark Iron Skulker is the perfect tool to improve our weakest matchups, Odd Paladin and Even Shaman. Without this card, Odd Rogue wouldn’t be nearly as strong as it is right now.

The play style of Odd Rogue is generally to be as aggressive as possible in the early game. Many games are decided by the first three turns of the game where your goal is to get as close to 1-mana card, hero power, Hench-Clan Thug, or Vicious Fledgling to make the strongest curve we can achieve. There are certain matchups that require a different game plan, however. Odd Paladin is one such matchup, where our priority is far more to fight for board control rather than have a good early curve. What this means is that our 1-mana cards become much more important, and cards such as Hench-Clan Thug and Vicious Fledgling go down in priority.

Against a deck such as Reno Priest or Warlock, the game plan often becomes more based around setting up a large amount of burst with tools such as Leeroy Jenkins and Cold Blood. The other option we have is to fight through 60+ health points, which requires us to have a large minion that can put out repeating damage. Options for this are Hench-Clan Thug or Vicious Fledgling most commonly, and sometimes through building up a board with Fungalmancer.

While many decks don’t play Vicious Fledgling in the current builds of Odd Rogue, we believed it is worth discussing. Vicious Fledgling is a key tool to beat some of the less common matchups that may become more popular again in the future.

The first list we wanted to share with you today is the best-performing list of Odd Rogue. While the build is as simple as it can get, this list is perfect to build out from to suit your play style, or to adapt to what your opponents are playing on the day. While Dr. Boom isn’t required in the deck, he does add some consistency to the deck for players who are less experienced with closing out the game with Odd Rogue. The best way to compare Dr. Boom is to training wheels on a bike. You don’t “need them,” but they speed up the learning process a lot.

The second list we have for you today is our favorite. Using the new tool Ziliax to improve the matchup against other aggressive decks, the list has cut the training wheel cards from the deck and is more difficult to pilot. This, however, means the deck itself will be much stronger overall.

If you got this far, we want to thank you for reading, and we hope you found some helpful information to get started in the Wild format. For the other Wild Basics we have created so far, check out our Hearthstone Wild guides to Even Shaman, Even Warlock, and Pirate Warrior next!