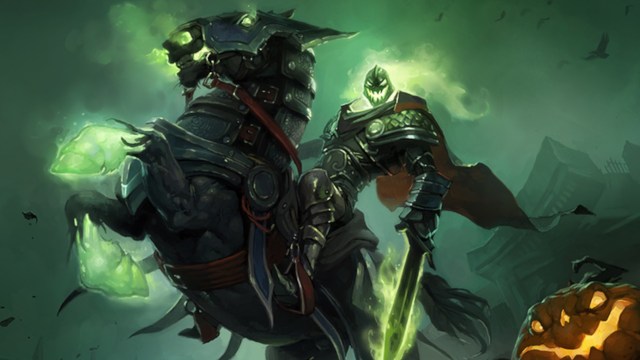 Provided by Blizzard Entertainment Artwork of the Headless Horseman in Hearthstone. The artist is Laurel D. Austin.

The next Hearthstone patch will feature Battlegrounds Battle Bash, Mercenaries updates, and more, Blizzard announced on Thursday. The announcement also promoted a Twitch stream happening on Nov. 1 that will reveal more about an upcoming Hearthstone expansion.

What is the Battlegrounds Battle Bash in Hearthstone?

For players of the Hearthstone Battlegrounds game mode, patch 24.6 introduces a new method to get cosmetic items. This is in the form of the Battlegrounds Battle Bash.

According to Blizzard, the Battle Bash has a curated and limited-time collection of cosmetic items.

“Entry to this Battle Bash can be purchased for money or 1000 Runestones, and players will immediately get two Bashes with purchase,” Blizzard explained. “On top of that, all players get one random Bash for free!”

Runestones refer to a virtual currency in Hearthstone that can be bought via the Battle.net web shop or the in-game shop. As for the first-ever Battle Bash collection, it’s the Hallow’s End one. Hallow’s End is the in-game equivalent of Halloween.

The collection features 10 items, of which includes a Legendary Board and a Legendary Strike. Players who purchase entry require seven top four finishes in order to obtain all 10 prizes.

“Each Battle Bash collection as a whole is only available for a limited time,” Blizzard added. “Individual items within each Battle Bash may be offered again at a later time.”

The next Hearthstone patch also features an updated free deck experience for new and returning players. The latter group includes those who did not participate in the Murder at Castle Nathria expansion.

New and returning Hearthstone players can try out six loaner decks for a week before choosing a free one for their collection. The updated free decks list can be viewed in the Blizzard Forums.

Love the new loaner decks. Making it easy for new and returning players to get back into the game is so important to the long-term health of the game. Great decision! https://t.co/LWUW2UJWQb

“Love the new loaner decks,” player Luke “NoHandsGamer” Kooken commented over on Twitter. “Making it easy for new and returning players to get back into the game is so important to the long-term health of the game. Great decision!”

For Hearthstone Mercenaries, all Task chains are available at all times starting with patch 24.6.

“Task progress will be determined by the Mercs actively in your Party at that time,” Blizzard detailed.

What this means is that players can select which exact Task chains they wish to work on and when to work on them. They also get to progress up to six Tasks chains at a time.

What is the Hearthstone Mercenaries Renown system?

Also arriving in the next Hearthstone patch is the new Renown system in the Mercenaries game mode. With this new system, players exchange extra coins for coins of owned Mercenaries that aren’t maxed out yet. The extra coins can be converted to Renown at any time in the game mode’s Campfire area.

“With Tasks now being available at all times, the Campfire daily reset will instead feature offers to exchange Renown for coins for Mercs they haven’t Maxed,” Blizzard noted. “The daily reset will also include some miscellaneous general Mercs Tasks, not tied to any current Task Chain, mixed in with those Renown exchange offerings.”

“We go big this year with some fun new things and the return of some old fan favorites,” Blizzard hinted.