You will be able to play Hearthstone Battlegrounds with friends soon 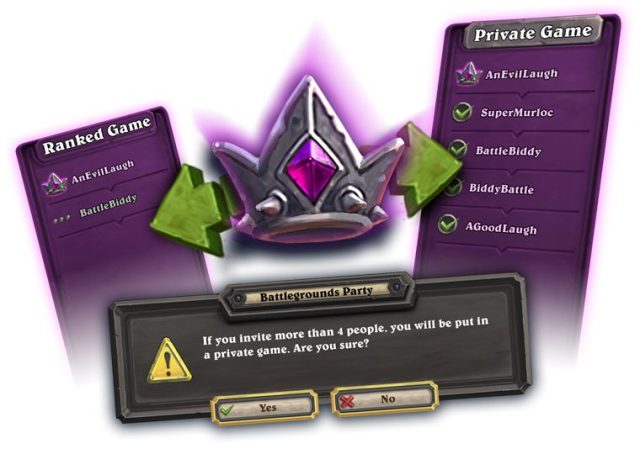 Hearthstone‘s Patch 18.2 is on the way, and with it comes several changes to Hearthstone Battlegrounds. The game mode will now have multiplayer, and you will be able to play with up to three other people. Here are all the changes coming with the update.

What is Hearthstone Battlegrounds?

If you are unfamiliar with Hearthstone Battlegrounds, it is Hearthstone‘s take on the auto-battler genre, similar to Teamfight Tactics and Dota Underlords. You choose a Hero and draft units from a shop that randomly offers different cards. You can level up your shop for more and better units. The goal is to create the strongest army in the game and defeat the other seven opponents.

As the name “auto-battler” suggests, battles are automatic and you have no control over how your units fight. You can position your units to attack in a specific order, but after that, it’s up to how strong your army is and how the AI chooses to attack. There is only one mode for Battlegrounds, and you gain and lose rating according to how well you finish.

Multiplayer and other changes

Up to this point, you could only queue solo for Battlegrounds. With Patch 18.2 you will be able to queue with up to three friends. This will be Hearthstone‘s first and only multiplayer game mode.

In addition to multiplayer, Hearthstone Battlegrounds is gaining three new Heroes. Here’s who they are and what they do:

Battlegrounds is also getting a new minion, losing an old minion, and changing a current minion. Here they are:

The Forbidden Library event is bringing Battlegrounds Parties, an all-new solo experience, and Heroic Brawliseum to the tavern! 🙀

Be sure to check out all the changes to Hearthstone and try a few games out with your friends once the patch goes live!