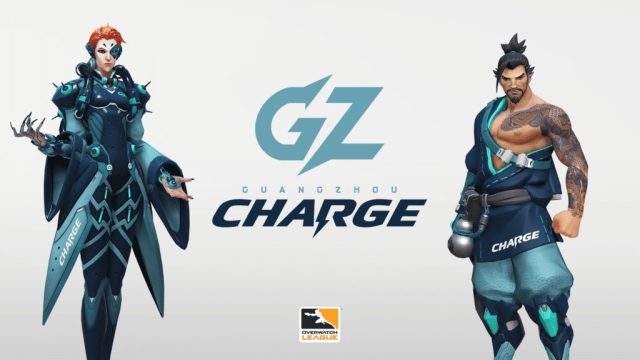 The Guangzhou Charge is the most diverse Chinese-owned Overwatch League team, coloured with dark blue and turquoise. Taking players from the United States, United Kingdom, Korea and China, their diversity might prove to be a challenge. But how did this team come together and how well made is it all?

Up until February 14th, I’m going to go over each team and what’s changed since the inaugural season. Each team will have it’s own article, going over which players and coaches left, and who has replaced them. After going over the changes and my opinions on them, I’m going to rate them much like I did in my weekly series last season. This rating will be a little more in depth, considering I have more time than a week to look over the teams, especially the new ones.

How exactly will the Charge fare in their first season in the Overwatch League? Let’s look into their players by their roles.

The interesting thing in this squad is that each player is a different nationality, with only Nero and Kyb sharing a language. In that case, let’s start off with them. Nero is a Genji and Pharah player formerly from Contenders team Toronto Esports, being signed as soon as the team was sold. Toronto Esports was a top tier North American Contenders team, reaching second place in the first season and losing to the best team in the quarterfinals in the second. He ended with the team on a high note, winning the 5th BEAT Invitational. His play is great, but the only worry is his age. Still 17 until late May, he shouldn’t be able to play until near the end of the season.

Next is one of the World Cup breakout stars: Kyb. He rose to notoriety playing for the United Kingdom in the 2018 Overwatch World Cup, helping them reach a surprising fourth place. He played Brigitte for most of the tournament, performing well. Playing for the British Hurricane (London Spitfire‘s academy team), he mainly played Genji and Sombra, knowing to flex to Roadhog when needed. That flexibility also helped the Hurricane win the first season of European Contenders, even though they disappointed in the second one. This pickup seems weird, but not necessarily a bad one. There is the possibility for communication issues, but his flexibility is undeniable.

Their only Chinese DPS player is Eileen. He played for the Chinese Contenders team LGD Gaming, helping them reach second place in both seasons. He also plays Genji, Sombra and Doomfist, which is starting to become a worry. All three DPS players so far in this roster have very similar hero pools, all known for their Genji. But besides that, his experience in the Contenders scene and potential can’t be denied.

Last but not least is Happy, luckily not a Genji player. He is a Korean DPS player formerly from Korean Contenders team Meta Bellum, helping them reach an admirable semifinal finish. He mainly plays Widowmaker and McCree, making him the only person with previous hitscan experience in the Contenders scene. It seems that if three tank three support is still meta, Happy might not play much, but he will be needed otherwise.

The tank players for the Guangzhou Charge are Seung-pyo “Rio” Oh and Hong-joon “HOTBA” Choi.

Starting with Rio, he is the main tank player for the Charge, playing mainly Winston and Reinhardt. He is a Korean player, also from Meta Bellum along with Happy and two of their four supports. Being from Meta Bellum means he led the team to their recent semifinal finish along with his fellow teammates on this roster. From watching him play, he seems pretty underrated, and can’t wait to see him on the main stage.

But the one most people know is Hotba, the former Philadelphia Fusion off tank player. He is also Korean, but his experience in the Overwatch League playing with English-speaking players is very good for the team. He has played D.Va, Zarya and Tracer in the Overwatch League. While he never ended up truly replacing ex-teammate Poko, his skill was still good enough to start on a team, and the Charge are going to. He is the only ex-Overwatch League player on the team, but is a formidable one.

Shu is another interesting pickup, coming from Toronto Esports along with Nero. Being Korean, he should meld with the ex-Meta Bellum players easier than a more Chinese focused team. At the same time, his experience in American Contenders is massive; clearly working on a mainly American roster before. He has played Zenyatta and Ana, but also has flexed onto the Widowmaker and held his own.

Next is Chara, one of the two Meta Bellum support players. He is Korean as well, one of the most experienced players in this roster. He’s been playing for Meta Bellum since early 2017. He mainly plays Ana, Lucio and Moira, and his flexibility on the support role is very good.

The only Chinese support player on this team is OnlyWish, also from LGD Gaming along with teammate Eileen. Alongside with him, he helped LGD Gaming reach second place twice in Chinese Contenders. OnlyWish is known as a Mercy main, something that screams out ‘substitute’ with how much she’s been nerfed recently. But when he’s played that role, he’s been very good.

Last but not least is the second Meta Bellum support: Rise. Formerly known as WonJaeLee, Rise was duo-ing with Chara for most of Meta Bellum’s games in Korean Contenders. His hero pool just consists of Zenyatta. This also seems like a substitute pickup, but the history with his team and potential for starting time makes this a good pickup.

The Guangzhou Charge starting lineup should be Kyb and Happy on DPS, Rio and Hotba on tank, and Chara and Shu on support.

The main reason I’ve chosen this lineup is because I’ve seen it, as the Charge has been the only expansion team we’ve officially seen played so far. They were challenged to a friendly show-match against their fellow pacific team, the Seoul Dynasty. It was an entertaining game, ending in a 2-2 tie. Not to mention, the coaching staff they got were also mostly from Meta Bellum, which seems like a good idea. But how will they fare in the Overwatch League?

Continuing with my rating system, I’m using the classic ‘out of 10’ like I used to in my weekly reviews. Here’s a link if you want to read it, but it’s a bit different now that I’m grading teams based on how their team was built without any (or very little) game experience.

I’m giving this team a 6.5/10. The players they’ve picked, while some of them overlap, all seems to carry flexibility and skill. The only issues I see with this team is the communication, as this is the only expansion team with players who speak three languages. Hotba is a great pickup, and Kyb is a very potentially great addition, but as we saw with the Shanghai Dragons last season, even two different languages can hamper a team. Will they be the new Dragons or the new Fusion? I don’t think they’ll be either, but closer to the Fusion than the Dragons in my opinion.