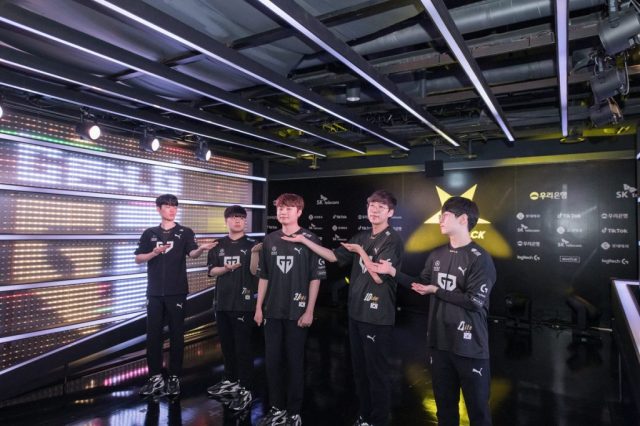 Popular Korean esports team Gen.G has defeated the famous T1 in the LCK regional finals, qualifying them for this year’s Worlds. Gen.G showed plenty of communication and teamwork throughout the series, which eventually led them to win against T1 3-0.

In the first game, the teamwork was evident as Gen.G’s top-laner Kim “Rascal” Kwang-hee, faced a tough gank. Luckily, their jungler Kim “Clid” Tae-min and mid-laner Gwak “Bdd” Bo-seong came to his rescue. The synergy continued throughout the game, posing as a problem to T1 in the long run. At one point, T1’s mid-laner Lee “Faker” Sang-hyeok attempted to force a team fight against Gen.G in the bottom river. Unfortunately, this did not end well as he died with several other teammates to follow. Overall, Gen.G’s bot-laner Park “Ruler” Jae-hyuk as Senna showed more than enough effort to help carry the team, leading them to victory.

Faker, as Sylas, attempted to redeem himself in the second game. T1’s team fights were much stronger this time around, but that all fell apart when Ruler’s Ezreal managed to get a quadra-kill in the late game. Unfortunately, this made it hard for T1 to make a comeback against their opponent, eventually ending the game in a loss.

The third game was probably the worst for T1, as they were completely out of sync with each other. Gen.G managed to win team fights as the stronger team and secure all necessary objectives to win. The game barely reached thirty minutes before Gen.G pushed towards T1’s Nexus and were crowned champions.

We’ve tried hard, but our Summer ends here. Thank you fans for supporting us this journey.#T1WIN #T1Fighting pic.twitter.com/P7jP6oO2cJ

Unfortunately for T1, this would be the third time that they haven’t qualified for Worlds. In 2014 and 2018, they faced the same dilemma, with Faker being the only consistent player throughout the years. T1 ended fourth in the regular Summer split and came in second for the Spring split, so fans were a bit skeptical about them making it to Worlds. Additionally, T1 had to switch some regular players out due to personal reasons. These roster changes were last-minute and a failed attempt at giving the team a leg up in today’s game. Regardless, T1 under performed, giving the glory to Gen.G to move on and represent Korea in this year’s Worlds. Gen.G will play alongside other LCK teams DamwonGaming and DRX.

We believe in you and know that you will make us proud! pic.twitter.com/VA2RYV8i4U