Cloud9 fall out of the tournament in the top eight 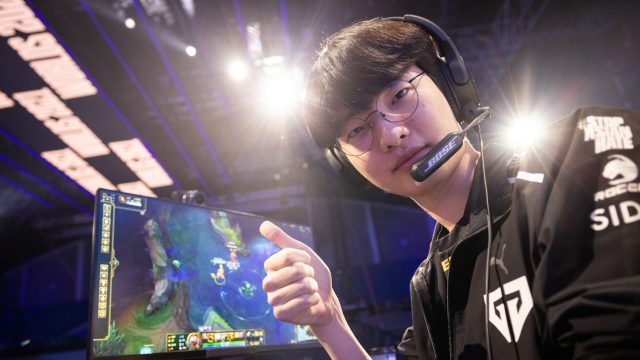 Photo by Colin Young-Wolff/Provided by Riot Games Rascal gives a thumbs up to the camera at Worlds 2021.

Gen.G Esports eliminated Cloud9 in a 3-0 sweep in the 2021 League of Legends World Championship quarterfinals on Monday to advance to the Worlds 2021 semifinals. The South Korean team will go on to face Edward Gaming, and with Cloud9’s elimination the final four at Worlds will not feature a North American or European team for the first time since 2017.

While this matchup was heralded as Cloud9’s best chance at making it past the fist round of the knockout stage, Gen.G jungler Kim “Clid” Tae-min and the rest of his team performed well past expectations to take the series without dropping a game. Clid specifically had a great performance, making individual plays and securing objectives over his Cloud9 counterpart. He also finished with a combined 18/5/12 KDA (kills/deaths/assists) on Xin Zhao and Lee Sin.

Gen.G were a part of the Group C mega tiebreaker bracket after each team in their group went 3-3 in the Worlds 2021 group stage. The League of Legends Champions Korea second seed fought through two final single-game matchups to make the knockout stage, defeating LNG Esports to make it out groups and then MAD Lions to claim the top seed. Thanks to making it out as the top seed, Gen.G matched with Cloud9 as the North Americans left Group A as the second seed.

This is the farthest Gen.G have gotten at the international tournament since their rebranding from Samsung Galaxy in 2018.

The former T1 jungler has been with Gen.G since 2019 and was the team’s top performer in the Worlds 2021 quarterfinal series. He held down the jungle in the early game, matching Robert “Blaber” Huang in the early game and securing multiple Barons even as the Cloud9 jungler tried to steal them. This year will mark the first time Clid has made it past the quarterfinals with another organization besides T1, then called SK Telecom T1, with his last appearance ending in the semifinals against G2 Esports.

Gen.G will go on to face the Chinese first seed in EDG in the Worlds 2021 semifinals. The League of Legends Pro League team defeated Royal Never Give Up 3-2 in their quarterfinals matchup.