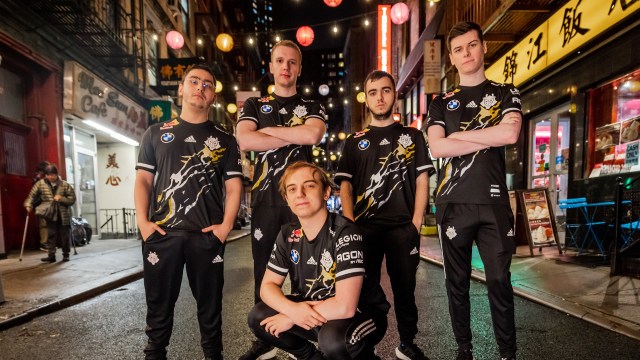 G2 picked up their first win at Worlds 2022 with a dominant win against Evil Geniuses.

G2 were on a 6-0 win streak against EG and were looking to extend that record after a disappointing start to DWG KIA at Worlds 2022. They banned the Akali from EG’s Joseph “Jojopyun” Pyun and went for the Aphelios-Rell botlane composition for late game insurace. G2 also allowed EG take the Maokai in top lane and were comfortable playing Fiora into it.

G2 came into Worlds with an 0-3 loss to Rogue. They also suffered a disappointing defeat to DWG KIA in the first day of the group stage. With Group B being one of the toughest groups in the tournament, it was a must win match for both teams.

“Coming into the group we were the only team who came with a loss,” Rasmus “caPs” Winther said in the post game interview.  The momentum is always very important. I was a bit worried about the beginning of the group but now that we have a win I’m just looking forward to snowball that more wins.”

A dominant performance against EG

They kicked off the game with a strong start with the top and mid lane going in their favor. The Nidalee pick from Kacper “Inspired” Sloma proved to be less impactful as he was unable to find early game advantages for EG. After getting five kills early on, G2 pulled ahead with a second rift herald fight going in their favor.

The game quickly slipped away from EG after this and they failed to turn this around later on despite securing a kill onto caPs. G2 marched down the mid lane in the 26th minute with baron empowered minions to hand EG their second loss of the group stage.

G2 face JD Gaming in their next game and will have to secure a win against them to improve their chances of qualifying. While it is a daunting task to face the LPL summer champions, G2’s Caps believes they can succeed and make it out of groups.

“I think just getting the confidence to challenge them on objectives; challenge them on waves and today goes a long way,” caPs said. “We saw both Rogue and Fnatic get wins. We don’t want to be the only EU team without them, so we’re just going to look to get even more than them.”