The European organization confirms early reports of a women's roster 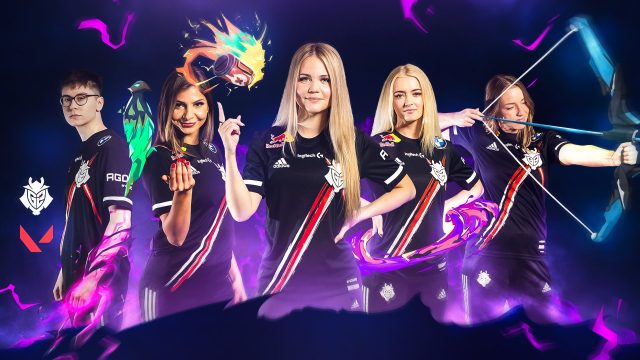 G2 Esports unveiled G2 Gozen, the organization’s new women’s VALORANT roster. The team was reportedly constructed in late Sept., and has finally been announced ahead of the next VALORANT Champions Tour Game Changers event in the European region. The majority of the new team was a a part of XSET Female before they were dropped in favor of a North American squad.

G2 Gozen is comprised of former XSET Female players Julia “juliano” Kiran, Zainab “zAAz” Turkie, Petra “Petra” Stoker, Michaela “mimimimichaela” Lintrup and relative newcomer from Rix.GG Lightning Anja “aNNja” Vasalic. Each player from the former XSET roster has been a part of the women’s scene in Counter-Strike for multiple years and recently switched over to VALORANT. This is the first all-women team for G2 as an organization across its multiple teams in different esports titles.

“To me they aren’t a female team, they are our VALORANT team,” Carlos “Ocelote” Rodriguez, founder and CEO of G2 Esports, said in the organization’s announcement. “At G2, we build teams and bring in players based on skill and brand fit. These are amongst the best female players in the world and we’re proud to have them. We’ll support them all the way, as we support all our teams, and look forward to seeing them grow and kick some ass as part of the G2 army.“

The owner showcased his new roster in a video announcement that saw an airplane deliver the team to the G2 headquarters and even had a brief appearance by Ocelote himself. Before getting picked up by G2, the roster competed as the unsigned team The Originals in the first EMEA Game Changers event in early Oct. They placed top four at the tournament, losing to eventual winners TENSTAR Nova in the semifinals.

The team will get to showcase their skills under the G2 banner in the next VCT Game Changers event on Oct. 25 in the Game Changers EMEA Series 2 tournament.