G2 Esports is back in VALORANT, but in the Americas Challengers league 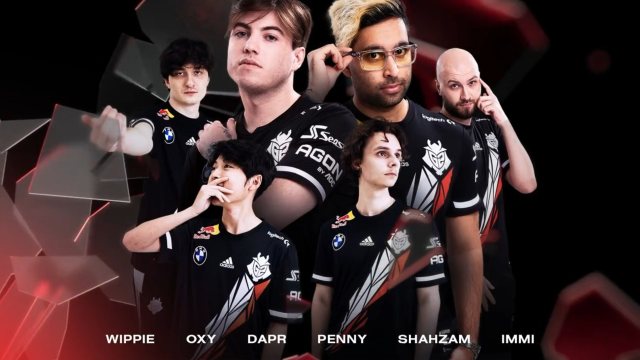 Provided by G2 Esports. The G2 Esports VALORANT roster for 2023.

In the Challengers tier of the Americas league for the VALORANT Champions Tour 2023 season, G2 Esports has revealed their starting roster. This includes some former Sentinels players, as well as some local North American talent to compete in the second tier.

As confirmed in an announcement video, here is the new G2 Esports VALORANT roster:

Out of the starting five, only one is new to VCT. The first two, ShahZaM and dapr both made their names on Sentinels. Their run from late 2020 to late 2021 is still one of the best runs a team has had so far in competitive VALORANT. As for wippie and penny, they made their name on Version1.

Alongside their coach Ian “Immi” Harding, who is also joining G2 Esports as a coach, they had a great start in VCT over 2021 and 2022. However, as franchising split both Sentinels and Version1 apart, these players have joined together to form the NA version of G2 Esports VALORANT.

Last but not least, OXY joins as a young talent from the NA VALORANT scene. He most notably played for Dark Ratio and Knights Academy, getting a bunch of finals appearances in lower-tier tournaments. As a duelist player, he fills in that role for the team and completes the starting roster.

G2 Esports were originally a team in the running for franchising; for starting at the top tier of the Americas league for VCT 2023. However, with the controversy around former CEO Carlos Rodríguez, the team effectively lost its spot. With that, their time in VALORANT was on hiatus, with little knowledge of what would be coming next.

However, with this reveal, the team is still committed to play in the Americas league, yet not starting at the top-tier as they originally planned to. Now, G2 Esports will compete in the VALORANT Challengers league for 2023, with hopes of winning Ascension and making it to the top-tier in future seasons.