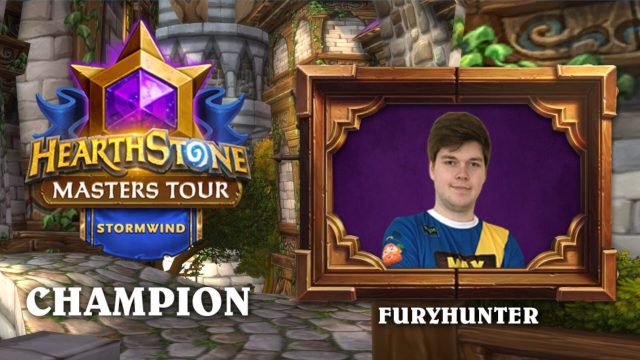 Provided by Blizzard Entertainment Before facing badajimpom in the final, FuryHunter went up against players such as MaggoGx and VK.msbc.

After a weekend of intense matches within the United in Stormwind expansion, Frederick “FuryHunter” Adam Møller became the Hearthstone Masters Tour Stormwind champion.

“It feels amazing to win. I practiced a lot for this tournament, and it felt great to finally get a top 16 and even better to actually go all the way and win it,” Furyhunter told Blizzard after the match. “My top 8 series were the most nerve-wracking experiences of my life. I had so many close games and series that my heart needs to rest now. I could just feel and hear my heart racing because of the tension.”

FuryHunter added that each victory, especially the reverse sweeps, felt amazing. During the semifinal, he thought he would be out of the tournament, he said, but he persisted and won. He said the tournament was a rollercoaster of emotions.

FuryHunter has been part of the Hearthstone scene for several years. In 2018, he took home the gold in DreamHack Summer 2018. A year after that, he claimed victory with his team at the Hearthstone Global Games.

FuryHunter, who now plays for MAX Team, gave a shoutout to his practice group after securing his win. He also acknowledged Jim “badajimpom” Boer for being a great final opponent. Other shoutouts included ones for wiRerHS and Franjo “reqvam” Blažević, who both helped him with his winning deck lineup.

A few shoutouts: Shoutout to #MTOG for the prac – best prac group in the world
Shoutout to @badajimpom for being a great opponent in the final and an overall awesome dude
Special shoutout to @wiRerHS for coming up with the lineup and to @reqvamhs for the prac to help refine it

The decks that he used during the tournament included Quest Warrior, Garrote Rogue, Aggro Elemental Shaman and OTK Demon Hunter.

Although badajimpom had the burst damage to take FuryHunter down on his next turn, it wasn’t enough. FuryHunter went face with a buffed minion and Reaper’s Scythe for exact lethal.