Worlds 2021 best plays: We can all relate to this one

Every once in a while, the pros remind us all League players are one and the same 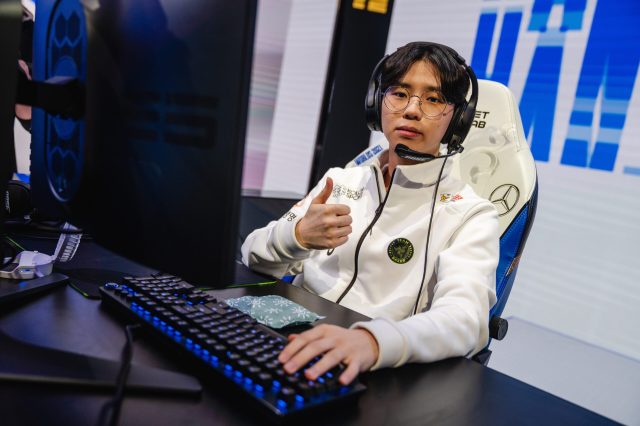 In Hanwha Life Esports’ third game of the 2021 League of Legends World Championship, top laner Park “Morgan” Gi-tae made an incredibly relatable play, reminding players across the world that pros are just the same as the rest of us.

While the remainder of his team were trying to stave off opponents Royal Never Give Up, as they pressured the mid outer turret around the twenty-minute mark, Morgan was off on his own in the bot lane shoving the wave so he could reset and rejoin his team. And the split second that teammate Oh “Vsta” Hyo-seong used his own flash to try and escape the encroaching RNG players, Morgan used his as well, standing in the middle of his teammates.

The casters noticed the summoner spell blink off, changing to a grey timer to indicate a remaining cooldown. The observers then replayed it to show his mistake on the big screen.

At some point in our League of Legends playtime, this has happened to all of us. Perhaps we fat-finger flash instead of another summoner or ping, or maybe it’s from falling for the age-old classic, “Press F to dance,” but we’ve all been there before. To put the icing on the cake of misfortune, Morgans’s flash also helped contribute to him missing the cannon minion when he was already down over 50 minions on his opponent, Li “Xiaohu” Yuan-Hao.

Because of how his champion was moving — pathing automatically from minion to minion with no extra movement between auto attacks — and because his flash was at the exact time as his supports facing directly toward the action happening in the mid lane, it’s possible that Morgan was watching the fight and instinctively flashed as if he were the Leona under fire himself.

Whatever the reason, he lost his flash and had to play a bit more defensively for the next five minutes. Luckily for him, he never got pressured too much and didn’t enter a true teamfight until right after his flash came back up. Even so, his mistake is a reminder of how us mere mortals regularly experience League.