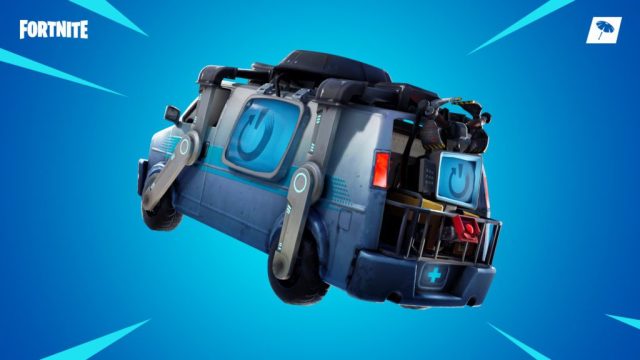 The Fortnite Season 8 v8.30 update is here and brings with it a long-awaited mechanic. Coming all the way from King’s Canyon in Apex Legends, the new Reboot Van has arrived. The new Buccaneer’s Bounty event comes with it.

Ever since Apex Legends launched in February, Fortnite fans have been longing for its respawning system. The ability to get back in the fight after you’ve died is a compelling feature for battle royale game. Well, Epic Games clearly saw the desire the community had and decided to fashion its own version.

Fortnite‘s take on the respawning system works the same as in Apex Legends, but with a twist. If you or a teammate dies, a Reboot Card is dropped in your place. This Reboot Card enables anyone from your team to pick it up and deliver it to a Reboot Van. However, after 90 seconds, the Reboot Card will vanish along with your chances of being respawned.

Once at the Reboot Van, players will spend a short five seconds respawning their teammate(s). During this process, the user will be completely vulnerable to enemy players. The respawned player will then be dropped from the sky with a gray pistol, 100 wood, and 36 light bullets. These vans will be scattered across the map and require a recharge of 120 seconds after one usage.

While it’s no secret that Fortnite fans have been craving this addition, it will be interesting to see how it plays out. With Apex Legends, there are 40 fewer players on the map and overall it’s much faster paced. This allows Apex to use the respawning system to great effect because it doesn’t slow down the game too much.

However, with Fortnite, the Reboot Van could make matches much longer and slower paced than they already are. It will change up players’ strategies in-game though, especially in competitive playlists.

Although, it’s unclear if this will make its way into the World Cup qualifiers this weekend.

A new take on LTMs

Along with the Reboot Van, Fortnite is introducing the Buccaneer’s Bounty event. In this event, a new Limited Time Mode will rotate in and out each day from April 10-15.

Each one of these Limited Time Modes has a specific set of challenges that players can complete for rewards. It also seems as though Epic is emphasizing the pirate side of this event. Treasure Map spawns have increased across the board in both chests and on the floor.

However, paired with the Buccaneer’s Bounty event, the Fly Explosives Limited Time Mode is back as well. This mode is all about the fun-natured side of Fortnite, as only rockets, grenades, and jetpacks can spawn.

It should be noted that the new Reboot Van is available in any LTM that is not considered “big team.” That means in the Fly Explosives mode, they will be enabled.

There is a ton to be excited about in the coming weeks with the World Cup qualifiers. If you don’t want to miss any of it, make sure to keep up with Daily Esports for everything Fortnite.