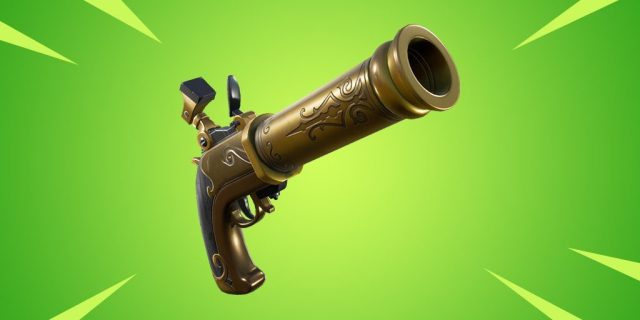 The new Fortnite Season 8 v8.11 update released early Wednesday morning. With it come the all new pirate-themed Flint-Knock Pistol, the return of the Impulse Grenade, and a new LTM, One Shot.

Fortnite has made it a habit to introduce appropriately-themed weapons with each new season. During Halloween, the RPG turns into a giant pumpkin head instead of a rocket. Season 7 saw Snowman grenades and items that matched the snowy map perfectly. Well, Season 8 is no different, as the Flint-Knock Pistol can now be found from floor loot across the map.

It seems that every new weapon Epic Games adds to Fortnite is either insanely overpowered or vastly underpowered. When the P90 submachine gun came out in Season 5, the entire meta of the game was changed due to its versatility. However, some weapons like the Infantry Rifle are virtually only picked up as a last resort. Just off of the patch notes, it looks like the Flint-Knock will fall into the latter category.

According to the patch notes, the newly added pistol will deal a base of 86/90 damage at close range. Though at a longer range, this damage is greatly reduced. There are two rarities, common and uncommon, and must be reloaded after every shot. Although, the real kicker with this weapon is the shooter is knocked back once a shot is fired. This knockback seems to allow the player to be immune to fall damage, as seen in the clip below.

*Knock, knock* The Flint-Knock Pistol is here with v8.11! Hop into the action and try out Fortnite's latest addition!

Find all the details in this week's Patch Notes: https://t.co/tazjQk0g0H pic.twitter.com/GynCZS8pIm

While this gun won’t be part of the metagame whatsoever, it could be a fun weapon to use.

Along with the new Flint-Knock, an item that fans have been asking to be un-vaulted is finally coming back. The Impulse Grenade made its debut back in Season 2 and was responsible for some epic clips. Streamers like Ninja and CouRageJD practically filled a Twitter feed with Impulse clips. With v8.11, they make their return to the game. However, they are coming back with new strength. Since there are so many vehicles in the game now, the Impulses now have an increased strength against vehicles by 344 percent. That means the newly added Ballers and Driftboards can easily be flung off course by a well-timed Impulse.

Speaking of the Baller, the spawn rate of the grappling vehicle has been decreased by 50 percent. This is welcome news, as there were an inordinate amount of Baller spawns all across the map this past week. While it was nice to have an entire squad of Ballers shortly after landing, this is a good change for Fortnite.

As with most new updates, there is a new Limited Time Mode introduced. “One Shot” brings a ton of crazy action to the map, as players are tasked with eliminating enemies with snipers against low gravity. As if this weren’t enough, each player spawns in with only 50 health and must scavenge for bandages to heal up. There are no shields, medkits, or any other healing items included with this game mode. Launchpads have also been removed from this mode.

What do you think of the new Flint-Knock Pistol and the rest of the v8.11 update? Let us know in the comments below. Make sure to stay tuned to Daily Esports for all your future Fortnite news.