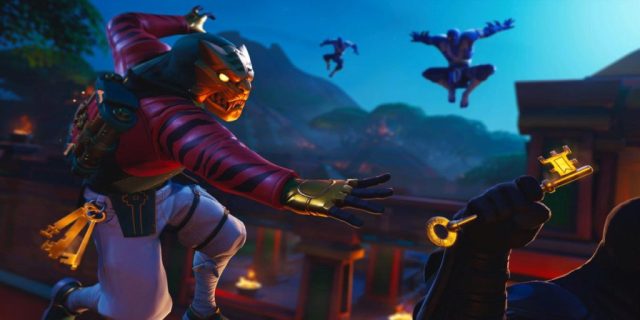 The sixth installment of Fortnite‘s Season 8 challenges has been released this morning. As always, players can complete both the free and Battle Pass challenges for extra Battle Stars or XP boosts.

With this week, Epic Games ramps up the difficulty with some of the tasks. While a few of these challenges can be done simply by playing Fortnite, a few will need specific instructions. That’s where we come in. If you need to catch up on your challenges for the exclusive Discovery Skin, check out our recent challenge guides.

Here are the Season 8, Week 6 challenges and how to complete them:

Right out of the gate, Epic Games throws a bit of a curveball. This challenge requires you to visit each of the five highest peaks located across Fortnite‘s map. It’s important to remember that this doesn’t need to be done in one match. You can visit all five peaks at your own leisure.

So, with that said, where are these highest elevations?

While there isn’t a requirement to do all of these in one game, the close proximity of some of the peaks makes it possible. There are four located on the western side of the map, with the outlier being the volcano.

Of course, landing at each of these spots in five separate casual games is the easiest strategy. However, playing “The Floor is Lava” mode makes this challenge a little more exciting. As the lava rises from the ground, you are forced to climb some of these peaks to stay alive.

Although, how you complete this challenge is up to you. Just make sure to go to the middle of each of the specified locations, and five Battle Stars are rewarded.

Another “visit” challenge, this one involves going sightseeing around the Fortnite map. Like the first challenge, this doesn’t have to be completed in one single match. Just as long as you stop by each structure, the challenge is done.

The structures are found where the player icon is in the pictures above. Simply visit each location and another five Battle Stars are yours.

As if Lazy Lagoon weren’t hectic enough already, it will now be jam-packed with players all trying to finish this challenge. While getting three eliminations may sound simple enough, these locations always have an abundance of players looking to get the same eliminations. However, you are free to complete this challenge in whichever location you like. For example, if you get two eliminations in Lazy Lagoon and another in Frosty Flights, it still counts.

If Frosty Flights is your choice, landing in the hangars may be your best bet. A majority of the players that land at Frosty will go to the buildings next to the hangars, allowing you to gear up and get some easy eliminations.

If Lazy Lagoon is your desired spot, landing at either the pirate ship or the shanty town is a good option. The pirate ship presents the issue of limited loot, but there are pirate cannons all over for an easy escape into the town or the woods. With the town, landing in a house or building will likely force you into a quick engagement. Finding the weapon before the enemy does will be the key factor.

Any way you choose to do it, getting three eliminations in either location will reward you with 10 Battle Stars.

The weekly “search” challenge involves the Tier 10 reward of the Battle Pass. On this Treasure Map loading screen, players will be pointed to the eastern side of the map. In-between the hero’s mansion and the desert racetrack is where players will need to search.

This spot is in the middle of a group of trees. There is a brown spot on the ground in this clearing that will reward the player with 10 Battle Stars when interacted with.

This challenge requires you to go in order, with each stage unlocking after the previous one is completed. Step one is to land at Fatal Fields. Next, the following stage will reveal and so on until the fifth stage is finished, rewarding the player with five total Battle Stars.

If you have a desire to complete your challenges as soon as possible, there are some “kill two birds with one stone” scenarios here. First, landing at either Lazy Lagoon or Frosty Flights can help with getting three eliminations for the third Free challenge.

Another scenario would be landing at Frosty Flights and visiting a few of the highest peaks that are in close proximity. The same goes for landing at Sunny Steps, which is right next to another high elevation spot, the volcano.

With this challenge comes the hope that you get lucky. To complete this task, all you need to do is throw two different throwable items. The throwable equipment currently in Fortnite include the Clinger Grenade, Stink Bomb, Impulse Grenade, Dynamite, Boogie Bomb, and the Rift-To-Go.

Though the task itself is easy, finding two of these throwables in a single match could prove to be difficult. There is no set strategy for finding more of these items except for looking in Vending Machines. Impulse Grenades are the most common item to find in a Vending Machine. So if you find a Clinger or Boogie Bomb and need one more throwable, make sure to check every Vending Machine you see.

The last challenge this week involves more RNG, unfortunately. Simply finding one of these weapons, especially the newly added Boom Bow, is challenging.

The Boom Bow comes in legendary rarity only, so your best bet is likely the Flint-Knock Pistol. While effective for most situations, the Flint-Knock really shines in the early game when few players have full shields. Also, if you land in a house or building and find a Flint-Knock, there is no danger of taking fall damage from the kick-back.

No matter how you do it, once you get just one elimination with either weapon, this challenge is done and five more Battle Stars are added to your Battle Pass.

That wraps this week’s Fortnite challenges! Was this guide helpful with completing your challenges? Let us know in the comments below. Keep up with Daily Esports for future challenge guides and Fortnite coverage.