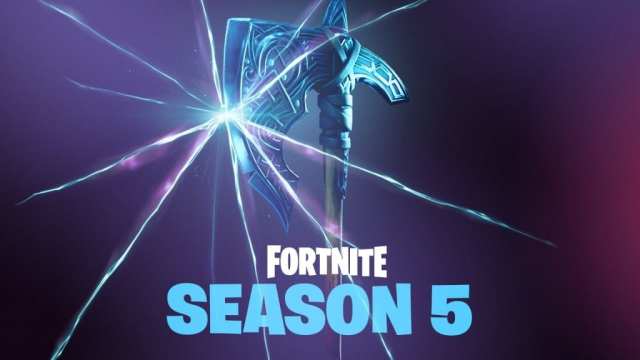 A second official teaser image for Fortnite Season 5 has been posted on Twitter. Shared by Epic Games, this latest image depicts what appears to be a Viking’s ax. However, there is a familiar rift-like overlay atop the image. Unsurprisingly, the new teaser bears a strong stylistic resemblance with the in-game image revealed yesterday. Though the two images represent different time periods, they both support the popular theory that Season 5 will focus on different eras of history. A large part of this theory is due to the presence of the rifts, which we explore below.

Now a familiar entity, similar rifts have been appearing in-game ever since the global rocket launch event. In the days leading to Season 5, the effects of these rifts are befuddling players, both in-game and in the real world.

These mysterious objects, the aftermath of the rocket’s collision with the sky, have been phasing in and out of view across the game’s map. The current trend is that within 24 hours of appearing, a rift will then absorb a nearby landmark. Players speculate that these locales are being sent elsewhere in time. Meanwhile, in their place, various artifacts are arriving, such as a detective agency in Retail Row.

However, the influence of the rifts extends to our world, too. Suggesting that perhaps the Fortnite realm is in a universe parallel to our own, the Durr Burger appeared in a desert in California. Players are now involved in a deep ARG, searching for final clues before Season 5’s official launch.

With only two days remaining until Season 5, the rumor mills are churning at maximum frequency. If the map does indeed experience a temporal shift in setting, what are some of the periods you hope to see?