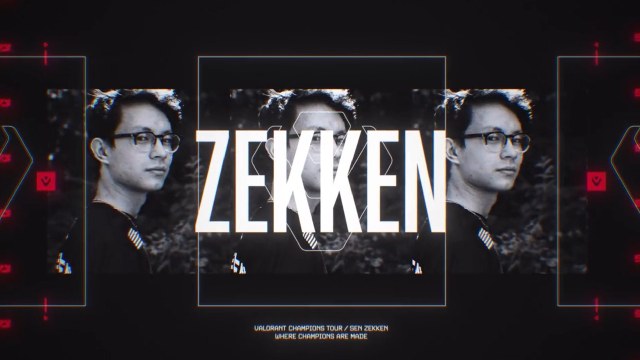 Provided by Sentinels. A screenshot from the reveal video for zekken joining Sentinels.

This marks their first official signing announcement for the 2023 season, after getting into the now franchised league. He isn’t the only member of XSET to join Sentinels, with his coach Don “SyykoNT” Muir also joining the staff. This marks the first step in another re-tool for Sentinels; this time aiming to compete at the top from 2023 onwards.

Much like a lot of XSET’s recent talent in VALORANT, zekken’s talent and flexibility lent well to the team’s runs in North America. Joining the roster in mid-2021, he was part of the roster both when they finished fourth at the 2021 Stage 3 Challengers playoffs and the 2021 NA LCQ. He remained for 2022, as they finished fourth yet again at the 2022 Stage 1 Challengers.

However, that was the final time zekken and XSET would have that marker. The team proceeded to win Stage 2 Challengers, defeating OpTic Gaming to get the top seed heading into 2022’s Stage 2 Masters in Copenhagen.

Despite a mediocre-at-best performance in Denmark, the squad were looking towards Champions. Alongside talents such as Matthew “Cryocells” Panganiban and Brendan “BcJ” Jensen, the team stepped up on their second try internationally. Despite coming in as an underdog, XSET managed to place 5th-6th.

XSET didn’t make it as one of the American teams in the new franchising system. Not too long ago, the first domino fell, as Cryocells joined 100 Thieves. Now, the other duelist on the team is also gone, but this time, joining Sentinels.

As mentioned earlier, zekken is the first new signing to the Sentinels roster since their 2022 NA LCQ run. While his old head coach joined him on Sentinels, the roster seems to be mid-transformation. As of right now, Michael “shroud” Grzesiek, Tyson “TenZ” Ngo, Michael “dapr” Gulino and Shahzeb “ShahZaM” Khan all remain on the roster. They could remain for 2023, but even the reveal tweet of zekken mentioned that this was “the beginning of a new era.”

Whether this is how the roster remains or if some big changes are to come, zekken has gone from XSET to Sentinels for 2023. As a homegrown American talent, he can show off what helped XSET reach a respectable finish at Champions 2022. But, this time around, he’ll be sporting the red and black.