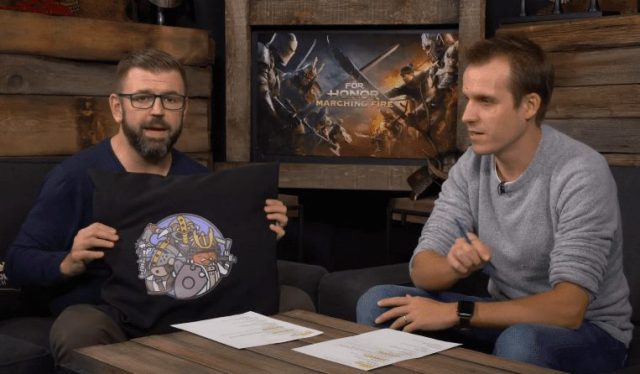 Community Developer Eric Pope was sick this week, so the boys filled in for him to discuss everything For Honor from the latest patch going live today to a new contest. This week’s Warrior’s Den was a shortie-but-goodie for sure. Next week’s show will be a very big reveal, with some upcoming surprises. The show will be prerecorded, meaning no chatting — and it’s the very last one before the holiday break!

We've got a bunch of amazing creatives in our community, so what better way to celebrate them than a gloriously fashionable contest!

Submit your For Honor T-Shirt designs to us for a chance to have your design created by the Ubi Workshop! https://t.co/aPKaLjpm9H

What’s this For Honor T-shirt contest?

In honor of For Honor‘s (heh) year 2 anniversary, Ubisoft is holding a T-shirt contest. The For Honor community has a considerable number of creative fans, and they are counting on that for this contest. The contest entails fans submitting their own T-shirt designs. The winning shirt will be sold on the Ubi Workshop store. The timeline for this contest is as follows. The entry period is Dec. 13, 9 a.m. ET, and For Honor is accepting submissions until Jan. 4 at 12 a.m. ET. The winner is selected on Jan. 4 as well and announced Jan. 31.

How does one qualify for this contest?

In order to qualify, entries must be For Honor-themed in nature. The T-shirt design must be submitted to [email protected] The subject line must be: “For Honor: Year 2 Anniversary, T-shirt Design.” Only players who have used this submission method will be considered for this contest. Creations must be original in nature. The design must be a still image in either vector art or HD PNG format. Artists must also include a signature somewhere on the artwork for a complete entry.

Winners will be chosen via the following process

In order to qualify for submission, fans must acknowledge that they own all rights to whatever design they submit and that all entry materials are original authorship works. This means that they have not been plagiarized from other works and do not violate or infringe on any copyright or trademark laws.

In addition to having their design featured on the Ubi Workshop, there’s also a cash prize of US $1,000 for winners.

The Warrior’s Den also announced a brand new Arcade Mode event, Dura Lex. This event runs until Dec. 20 and involves some challenging fights. Yes, that means fighting even more enemies with fire-based attacks. One particularly challenging fight involves two Lawbringers with fiery weapons. Never fear, however — the team also patched the game, and one of their improvements was to tone down level 3 bots in Arcade Mode. It’s still gonna be hard; it just won’t be that hard.

Ubisoft has also released a ton of new emotes for year 1 and Wu Lin players. This includes a hockey-themed emote, a lumberjack chop, a “chicken” taunt, and even a disco-themed emote. These can be purchased with hard-earned Steel in the Hero customization mode, like other emotes.

Are you going to enter the T-shirt contest? How do you like the new emotes? Let us know!