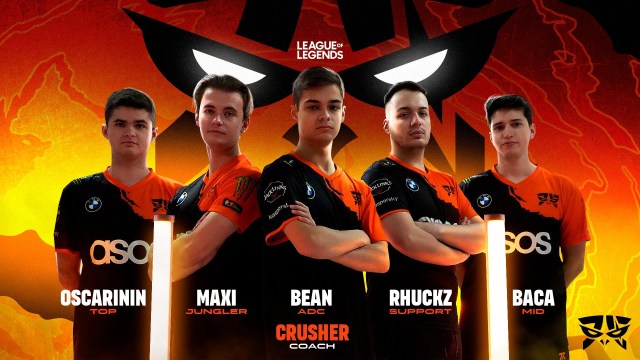 Provided by @FnaticTQ Bean and Rhuckz both pictured here may have Fnatic's Worlds 2022 fate in their hands.

Just days before the start of the 2022 League of Legends World Championships, League European Championship representivies, Fnatic have offically avoided the absolute worst case scenario. With both members of their bot lane contracting COVID-19 and not able to travel, Riot Games have permitted Fnatic an emergency secondary substitute player for Worlds 2022.

Riot Games has permitted FNATIC an emergency roster addition due to two players contracting COVID. The player Rhuckz, from Fnatic's ERL team "Fnatic TQ", has been added as a seventh player to the FNC roster.

Rúben “Rhuckz” Barbosa, the support player for the organization’s ERL team Fnatic TQ, has safely arrived in Mexico and will play for Fnatic at Worlds 2022 in the event that their starting support player Zdravets “Hylissang” Iliev Galabov cannot make it to the team in time. Their other substitute player, Louis “BEAN” Schmitz, is already with the team in Mexico City.

#Worlds2022 UPDATE: @rhuckz has arrived safely in Mexico and will sub for Hylissang should he be unable to travel. We will provide more updates within the next 48 hours regarding Upset and Hylissang. Thank you for your support and well wishes for the players! https://t.co/fgLRZxHCTz

Hylissang and Elias “Upset” Lipp were not able to travel with the team as they embarked on their journey to Mexico City early last week due to their positive COVID-19 status. Not knowing when their two starters would arrive, their tournament lives were in limbo before it even began. Each team is required to have one subistute but no more just in case one player was unable to play or for strategic purposes. However, Fnatic were obviously put in a situation where one subsitute would not suffice which allowed Riot to grant them an emergency exemption. As of this article’s publishing, Upset and Hylissang have not been cleared to travel.

As for Rhuckz, he has been playing competitive League since 2014 with stints various ERL teams and even a short stay on the RED Canids in Brazil. In 2022, Rhuckz didn’t have the best year being in the lower half of support players in stats according to Oracle’s Elixir. Fnatic TQ had a solid spring split, even qualifying for EU Masters, but the team finished 8th in the SuperLiga 2022 summer split and didn’t even qualify for playoffs. The silver linings here are that Rhuckz and BEAN were the bot lane duo for Fnatic TQ so at least synergy is there if both Upset and Hylissang don’t make in time for the start of play-ins and at least BEAN has had Worlds experience before as the substitute player for Upset last year.