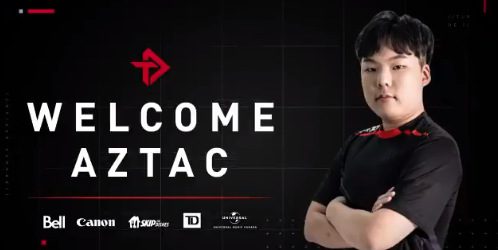 After a quiet off-season, more Overwatch League news has arrived. The Toronto Defiant have signed support player Jeong-su “Aztac” Park. This flex support is formerly of World Game Star Phoenix and Uprising Academy. Aztac is the third signing for the Defiant this off-season. Also, he is the second player signing to the Overwatch League from the Korean Contenders champions.

Join us in giving a warm welcome to our newest support – @wjd1209tn, coming on for the 2021 season! *Pending League Approval #RiseTogether pic.twitter.com/OyR4BJSxY0

Ever since 2018, Aztac was playing in the Pacific region’s trials to join the Contenders scene. He finished second on team EXL-RAISO before they split due to ownership. Afterwards, he joined team ReStart in Chinese Contenders, finishing low. However, five months later, he joined O2 Blast and led them to a second place finish. Moving on, he joined Korean team World Game Star Phoenix. Afterwards, he ended up staying with the team for most of 2020, leading them to two top three finishes. That second top finish ended up being the season win over popular favorites RunAway. Along with currently acquired Boston Uprising player Jin-ui “im37” Hong, he was on loan to World Game Star Phoenix from Uprising Academy. But, Aztac mainly played in Korean Contenders, and as of now, however, Aztac is a Toronto Defiant player. Uprising Academy did send him regards for the time spent with them.

It's time for Aztac's next step. We wish @wjd1209tn luck as he joins the Overwatch League with the Toronto Defiant!

To put it simply, the community didn’t expect this signing. But after more thought, it makes a lot of sense. World Game Star Phoenix won the most recent Korean Contenders season, showing their skill. This made their players sudden hot commodities to join the Overwatch League. Plus, Aztac was regarded as one of the best available flex supports from Korea. However, it is important to know that he mainly plays Zenyatta and Ana. Earlier on in the month, flex support William “Crimzo” Hernandez was also rumored to go to the Defiant. Crimzo could still join, but it seems that this is just a better fit for the new Toronto Defiant team. Aztac should start for the Defiant after this path to the league, but only time will tell.