What to know about filling up your characters select screen 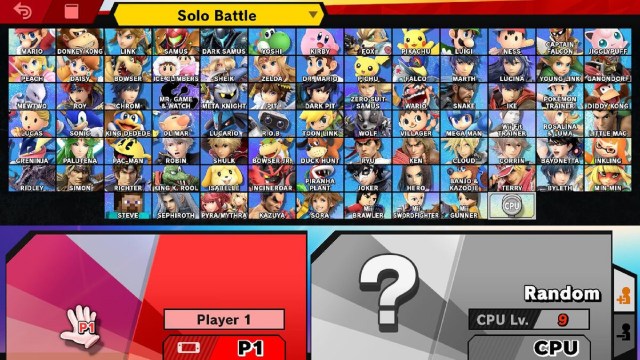 With a starting roster of only eight playable characters, Super Smash Bros. Ultimate has more unlockable fighters than any other game in the series by far.

As a result, it can take quite some time for players to get their hands on every single character this Smash game has to offer without the fastest way to unlock characters in Ultimate. However, there is a strategy that players can take advantage of in order to make the unlock process go much more quickly. Here’s an overview of the fastest way to unlock all characters in Super Ultimate.

Fastest way to unlock all characters in Smash Ultimate

Besides playing the World of Light story mode, the primary way to unlock characters in Smash Ultimate is simply by playing multiplayer matches, whether against a CPU or a group of friends. As with previous Smash games, players will occasionally get the chance to battle a CPU of a new fighter after a multiplayer match. Successfully defeating that CPU will then result in that character becoming playable.

Players will get the chance to face their first unlockable fighter after their very first multiplayer match. Afterward, it’s supposed to take about 10 minutes before another CPU unlock match will begin. However, the fastest way to unlock Smash Ultimate characters involves bypassing this timer.

After unlocking their first character, players should close out of Smash Ultimate completely, then open the game back up again. This process completely resets the unlock timer. As a result, they will get to battle another CPU in an unlock match after just one match. Players can repeat this process after every match in order to get every playable character as quickly as possible.

Using this method, players can expect to unlock the following fighters:

Other characters outside of the base roster

The above method is the fastest way to unlock most characters in Smash Ultimate outside of the starting roster of Mario, Donkey Kong, Link, Samus, Fox, Kirby, Pikachu and Yoshi. However, there are a few other characters beyond the base roster that aren’t available through playing multiplayer matches.

While Mii Brawler, Swordfighter, and Gunner are not technically part of the base roster, players can add these characters to their line-up fairly quickly. They simply need to head to the “Games & More” menu, where they can create Mii Fighters as soon as they start playing the game.

Meanwhile, there are an additional 12 characters available as downloadable content. The only way to get these DLC characters is to pay for them. Piranha Plant is available on its own for $4.99. Meanwhile, the remaining characters are available through Fighters Pass volumes 1 and 2 for a combined price of $54.98.

Here are all of the DLC characters players can add to their roster by purchasing the Fighters Passes: