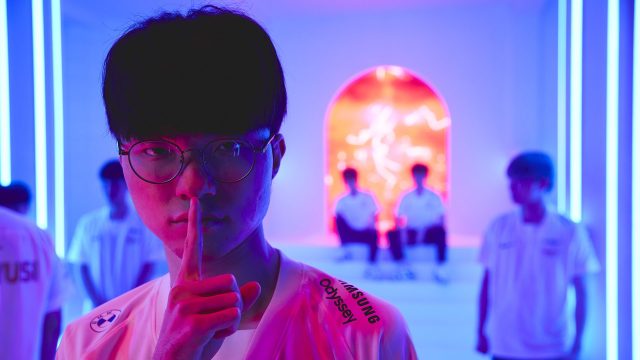 After advancing to the quarterfinals of the 2021 League of Legends World Championship, Lee “Faker” Sang-hyeok said he has set his sights on winning the tournament in a post-match interview.

“Even though I have been here multiple times,” Faker said. “I won many titles but still, I’m here to win Worlds.”

With only one loss to Edward Gaming in the entire Group Stage, T1 have certainly met all expectations so far. However, for Faker, this is still not enough.

“I cannot say I am satisfied because it is only the Group Stage. I have more to display,” he continued.

What another title would mean

T1, formerly known as SK Telecom T1, is the most successful team in World’s history, having won three championships. While T1 has gone through different iterations over the past years, Faker has remained central to the team’s rebuilds.

Since their rebrand, they have struggled to find international success. T1 also failed to qualify for Worlds 2020 after losing to Gen.G in the final of the League of Legends Championship Korea Regional Qualifiers. Moreover, throughout the season, they rotated their roster with Faker riding on the bench at times. While there is still much work to be done, winning Worlds 2021 would cement T1 and Faker’s name in the history books even more than they already are.

Heading into Worlds 2021, T1 were the second seed-favorites in Group B with EDG expected to finish first. However, T1 defied expectations winning every single game on Day 4.

With EDG’s loss against 100 Thieves, T1 automatically locked in first place. Their position means they can only face second-place teams from any of the other groups in the quarterfinals. This also leaves open a potential finals match between DWG KIA and T1. Both teams have performed exceptionally well so far and T1 will definitely want to avenge their loss at the LCK final if the rematch happens. However, for now, Faker will turn his attention to the quarterfinals and hope to march one step further in fulfilling his goal.