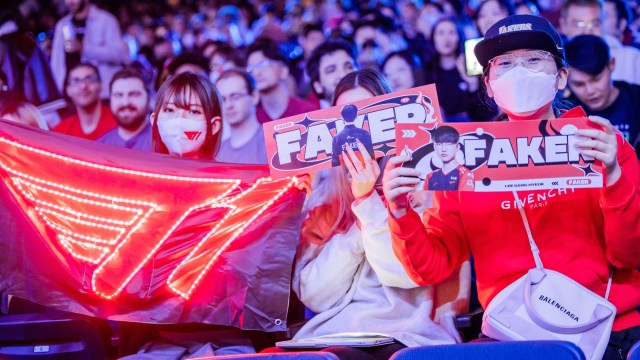 In what was set to be the closest match on paper at League of Legends Worlds 2022, T1 anti-climatically swept Royal Never Give Up in the quarterfinals to qualify for the semifinals for the second straight year. But while the result was boring, the moments that led up to it were anything but.

Game 1 saw T1 jump out to an early lead after a jungle invasion by the LCK second seed which set back Yan “Wei” Yang-Wei on Viego. But Wei clawed his way back in the game with a triple kill just minutes later. However, Mun “Oner” Hyeon-jun’s invasion set the groundwork for the rest of the game, with him ahead and Choi “Zeus” Woo-je having a massive advantage in the top lane, RNG just continued to fall behind while Zeus and Oner were inevitable.

After a methodical 35 minutes of taking everything from the map, T1 took Game 1.

Game 2 was a complete 180 in the early game. With RNG investing into the top side by giving Chen “Breathe” Chen Fiora and this time, Wei was the one ahead. With RNG dominating the top side of the map from minute one, it looked like the game was all RNG’s even through the mid and late game. However, it was an all-time choke performance by their leader Li “Xiaohu” Yuan-Hao which allowed T1 back into the game but even with the game dead even and a chance for redemption once more, Xiaohu got caught out again which allowed T1 to make the 8k gold comeback to go up 2-0.

Game 3 saw RNG on full tilt. Nothing the team did in the early game worked but they tried to force things anyways. They did eventually try to fight their way out of the corner but T1 were simply the better team. In time RNG had a step back into the game, T1 pushed back harder.  It was a sad end to what should of been a fantastic series. T1 moves onto the semifinals for the second straight year.

RNG continues to be the spring warriors as they in classic fashion, destroy the LPL in the spring only to run out of speed at Worlds. The team has not made it past the quarterfinals at Worlds since 2017. That year they were eliminated by T1 too.

T1, on the other hand, are carrying huge momentum into the next round. They will match up against the LPL champions, JD Gaming next weekend live in Atlanta, Georgia at the State Farm Arena.