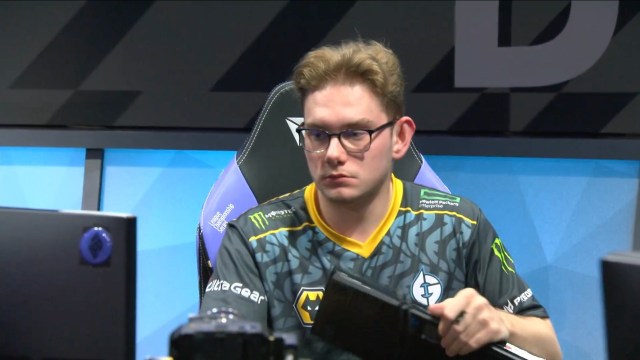 Screenshot via LCS Twitch Inspired reflects on the series against C9 and what the next steps are.

Now in 2022 as a member of Evil Geniuses in the League of Legends Championship Series, Inspired is the league’s best jungler on the leagues best team — and history seems to be repeating itself after EG lost in the upper bracket of the 2022 LCS summer playoffs to Cloud9. Inspired said the circumstances were different with their loss against C9 but it could be summed up in a couple of short words.

“I think today we just choked,” Inspired said. “I think on Rogue, we lost because we because we were playing bad so it’s a different kind of losing.”

Heading into this best-of-five series, EG had the earned privilege of having valuable footage from C9’s last series win against Counter Logic Gaming while C9 didn’t have any recent footage to scout from EG. Inspired said that the prep didn’t go as planned not only because C9 brought out surprise picks that worked but also because EG’s unorthodox style didn’t which included first picking Yuumi and favoring Red Side when most teams have preferred Blue Side.

“We thought when both Zeri and Sivir were open that the Yuumi side would just be stronger,” Inspired said. “I think we wanted to surprise them and give advantage to our solo lanes so we felt like going Red Side might be a better option.”

Although the drafts were not the end all be all, they certainly didn’t work how EG expected them to with C9 keeping EG guessing throughout the series. But with EG facing elimination in Game 4 and the game even with both teams dancing around C9’s potential Dragon Soul point, Inspired made a questionable play by using his smite early which caused C9 to push the go button and ultimately win the game. Inspired said that the smite was calculated.

Shoutout to the crowd cheering for scuttle crabs so much that it mind controlled Inspired to waste smite for it over Infernal Soul.

“I felt like I had to use the smite to force C9 to the drake,” Inspired said. “They were poking is really hard and I think that we’ll eventually have to give up the drake and our position would be even worse so I smited instantly to make them start the fight because I felt that would be the only way for us to win…I think it was a good decision.”

Inspired felt that he played well throughout the series but being forced to make sub-optimal plays like the smite in Game 4 comes down to the current metagame.

“I think it’s very hard for junglers to actually do something in the current meta, especially with the scaling bot laners,” he said.

With that said, EG will head into the losers bracket where TSM awaits them. Although the team is of course very confident they can rebound, Inspired made a note to not underestimate TSM as their mid and jungle duo is formidable.

“I think TSM is a decent team, in scrims they actually have one of the best results against us,” Inspired said. “We usually do well against 100 Thieves, [Team Liquid Honda] and C9 but TSM was actually going 50/50 against us.”

If EG makes it past TSM, they will match up with the winner of CLG and TL and with the two Worlds 2022 favorites from NA in the losers bracket and only one spot left, Inspired is looking forward to the match if it happens.

“It will be a very, very fun lower bracket,” Inspired said. “Hopefully we win our games and face them…it will be an interesting way to finish the season.”