Everything we know about Ramattra so far in Overwatch 2

Everything we know about Ramattra so far in Overwatch 2 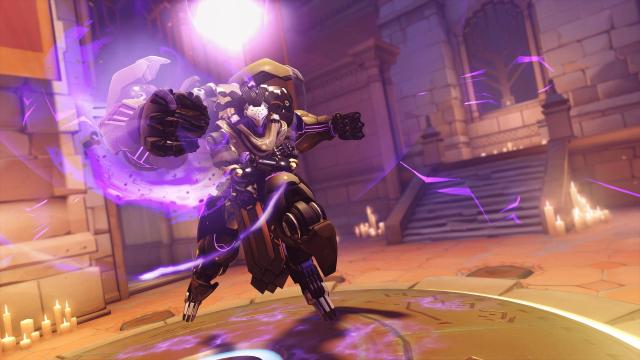 Provided by GamerWK. Ramattra, in his nemesis form on Nepal.

Other information came out online despite only a trailer and a statue to show off the tank hero. Information from developers goes more in-depth into the omnic’s backstory and what he plays like in-game. As for in-game, some pictures were revealed in an interview piece for GamerWK but removed afterwards. Luckily enough, they remain on Twitter and other platforms for fans to look at.

Get your first look at Ramattra in #Overwatch2 🧙‍♂️

His 'Omnic Form' lets him protect his teammates, wielding a staff as his weapon. His 'Nemesis Form' transforms him into a larger, more menacing hero where he can punch his enemies 🦾

How Ramattra fits into the Overwatch world

From both the small interview the developers had on Watchpoint as well as a more extensive one from GamerBraves, Ramattra has a link to Zenyatta. Citing the fans’ desire for more lore involving Zenyatta, this hero shares a brotherly connection with the support hero. Interestingly enough, Ramattra was the one that brought Zenyatta back to the monastery and introduced him to the Shambali. As also shown in the reveal trailer, Ramattra clearly has an extensive past. From starting as an omnic soldier, he then spent some time as a monk himself.

If fans remember, during the Storm Rising cinematic, Doomfist was talking to an omnic. That omnic is Ramattra and they are someone who plays a key role in both Null Sector, Talon, and the future story of the Overwatch 2 PvE game mode. One thing that developers confirmed in interviews is that Ramattra is the leader of Null Sector, a group of omnics fighting for omnic freedom.

For developers, heroes fit into the tank role if they see the character as a protector of the people. In Ramattra’s case, his people are fellow omnics, so the team always thought of Ramattra as a tank hero.

Plus, the team went into his development with a key idea in mind: having multiple forms. As revealed, Ramattra will have two forms to use in-game, his regular omnic form and a larger, hulking form named the nemesis form. Stylistically, these two forms are meant to be different but clearly remain the same character.

Some photos online show how Ramattra looks in-game, in both of these forms. His omnic form primarily uses his staff, looking more like Sigma, while his nemesis form looks closer to Reinhardt or Orisa. The developers confirmed that his omnic form requires a lot of skill to master, alongside when to switch forms and become more tank-like and melee-focused.

Some abilities revealed, but not explained

As for his abilities, the only knowledge we have is based on pictures and the knowledge of his two forms. For example, this picture below was one of the few released that show off the abilities Ramattra has. These might be subject to change before his release, but this is the extent of what we know so far.

Some simple facts include that Ramattra does have armor in his nemesis form, totaling 600 health. In this form, his attacks revolve around his punches as opposed to a different attack in his omnic form. What we can see from the picture is that his left-shift ability is what he uses to swap between forms. His right click is defensive for both forms but changes around which one is chosen. For example, the omnic form has a shield icon, while the nemesis form blocks damage similar to Orisa’s fortify.

Last but not least, the E ability seems to be an area-of-effect ability. Whether this ability locks foes inside, slows them or does something different is yet to be determined. Either way, seeing an AOE ability is nice considering how few of them there are for tanks in Overwatch 2.

This post will update alongside more information about Ramattra’s kit.