How to register for the Street Fighter 6 closed beta

How to register for the Street Fighter 6 closed beta

Early access is on the horizon for a select few players 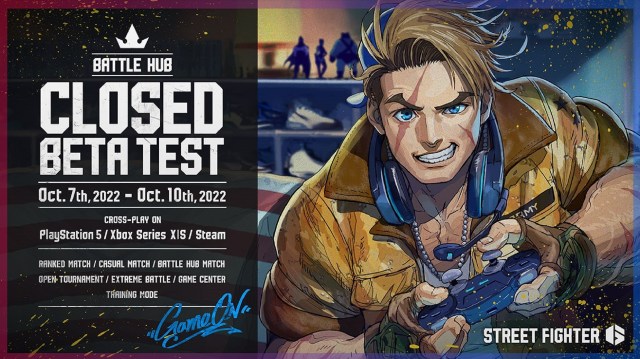 Provided by Capcom The beta will feature cross-play among platforms.

Capcom announced Thursday a closed beta test for its upcoming fighting game, Street Fighter 6. From October 7-10, some people will be able to get early access to the first new main series Street Fighter game since 2016.

The playtest will be available on PC, PlayStation 5 and Xbox Series X|S for players who are selected to participate. Here’s everything prospective participants need to keep in mind about the Street Fighter 6 closed beta before it begins next month.

Participants in the Street Fighter 6 closed beta will be chosen randomly via a lottery system. To sign up to join the lottery, players must head to the beta’s registration website and click “Apply for the Closed Beta Test.” After that, they must indicate which platform they intend to play the beta on.

Players should note that there are a few participation requirements. To play the beta, an individual must be more than 18 years old and must have an active Capcom ID. In addition, players will need to link their Capcom ID to an account for their respective platform before playing the beta. However, they do not have to complete this step before applying.

The Street Fighter 6 beta will feature a wide array of playable content, from multiplayer matches in the Battle Hub to single-player gameplay in the Game Center to a hectic mode with ever-changing rules in Extreme Battle. There will be six playable stages and the following eight playable characters: Ryu, Ken, Chun-Li, Guile, Luke, Jamie, Kimberly and Juri.

Players will have the option to customize their own avatar, play through tutorials, set their preferred controls and much more. The beta will also include the real-time commentary feature, highlighting esports casters like James Chen and Steven “Tasty Steve” Scott.

A full breakdown of additional content, such as in-game currencies and tournaments, is available on the beta’s registration website.