Everything to know about the MultiVersus ranked mode alpha - Upcomer

Everything to know about the MultiVersus ranked mode alpha 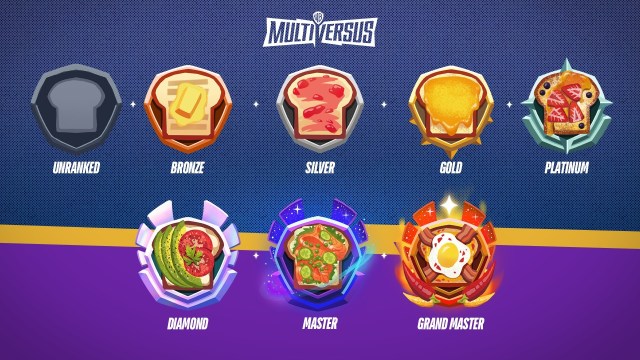 Provided by @multiversus via Twitter Players have one week to progress through a number of toast-themed ranks.

The long-anticipated ranked mode has finally arrived in MultiVersus, albeit only for a temporary alpha. Nevertheless, this public playtest will allow players to provide feedback on what the game’s final ranked mode should eventually look like.

For competitive players looking to show off their skills in-game, there’s no better time to jump into the multiverse than now. Here’s everything players need to know about the new MultiVersus ranked mode alpha.

How to play the MultiVersus ranked mode alpha

The MultiVersus ranked mode alpha became available at noon ET on November 8 and will remain playable until sometime on November 15. After hitting the large “Play” button on the main menu, players can find the “Ranked” option at the top right of the “Online” tab.

Both 1v1s and 2v2s are available in ranked mode. Currently, players are allowed to run two of the same character on a single team, although this could change for the mode’s final iteration. In addition, the stage for each match is randomly chosen from the pool of existing stages, much like in the game’s unranked mode.

Every player who wins 15 sets or more during the week-long playtest will earn a commemorative in-game profile icon called Triumphant Toast after the alpha is over. This profile icon depicts a trophy with the No. 1 depicted on the front and a golden piece of toast on top.

Unlike in unranked mode, the MultiVersus ranked mode alpha requires players to play out a full best-of-three. After each set, players will receive a certain number of Ranked Points based on their performance. Then, players can rank up after meeting certain RP thresholds.

There are currently seven different ranks available, each represented by a differently-decorated piece of toast. In addition, some ranks have multiple divisions that players must climb through before graduating to the next rank.

Here are all of the MultiVersus ranks, how many divisions they have and how many RP it takes to reach them:

Once a player reaches the Master rank, they will then become subject to rank decay in the MultiVersus ranked mode alpha. If a Master or Grand Master player doesn’t play ranked mode for three days, they will start to lose 60 RP per day for every day they don’t play. However, they will only lose RP down to 2,200, meaning they are not at risk of falling out of Master rank.