Everything to know about First Attack 2022 - Upcomer

Everything to know about First Attack 2022

The Smash World Tour heads to the Caribbean 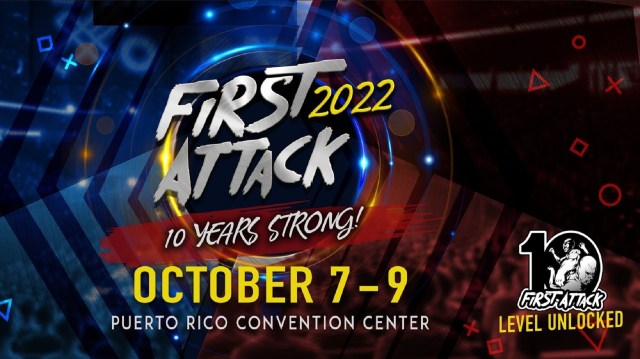 Provided by start.gg This fighting game major will feature more than 20 different games in some capacity.

In addition, there will be a number of fighting game brackets featured at the event. Here’s everything viewers need to keep in mind about First Attack 2022 before the tournament kicks off this weekend.

It's time for a trip to Puerto Rico!

Carlos “Sonix” Pérez will be the top seed and clear favorite to win Ultimate Singles at First Attack 2022. This year, he has taken sets off of multiple people ranked in the top 10 in North America. As a result, he should fare well against a field of lower-ranked players like Alexis “Goblin” Stennett, Tomoki “kept” Ikeda and Ricky “Ling” Gorritz.

However, No. 5 seed Bharat “Lima” Chintapall could also make a deep run. He is entering this tournament fresh off of a third-place finish at Lost Tech City 2022. There, he earned the biggest win of his Ultimate career by beating Enrique “Maister” Hernández Solís, qualifying for the Panda Cup Finale in the process.

Meanwhile, the Melee Singles bracket at First Attack 2022 has only 15 entrants, meaning there will be a large amount of points granted to a small number of people. The top two seeds are Alan “Excel Zero” Barreto, who has been playing since 2008, and Kevin “Kata” Rivera Bonilla, who has been playing since 2015. As a result, it will be a battle of old-school Puerto Rican Melee versus newer-school Puerto Rican Melee.

How to watch First Attack 2022

The First Attack 2022 tournament organizers have not yet announced a full stream schedule for the event. However, it is likely that the main stream will be on the firstattackpr Twitch channel. The Smash portion of the event will start at 5 p.m. ET on Friday with Melee pools.

Ultimate pools will then start at noon on Saturday. Afterward, Melee top four will kick off at 6 p.m., with Ultimate top 48 beginning at the same time. Championship Sunday will include Ultimate top 24 at noon, followed by Ultimate top eight at 6 p.m.

Meanwhile, there will be a number of fighting games and other esports featured throughout the weekend. Here is the full line-up of main games and community-run side events included at this tournament alongside Smash: