Everything to know about Fête 2 - Upcomer

Everything to know about Fête 2

The UK’s biggest Melee tournament and social experience is back 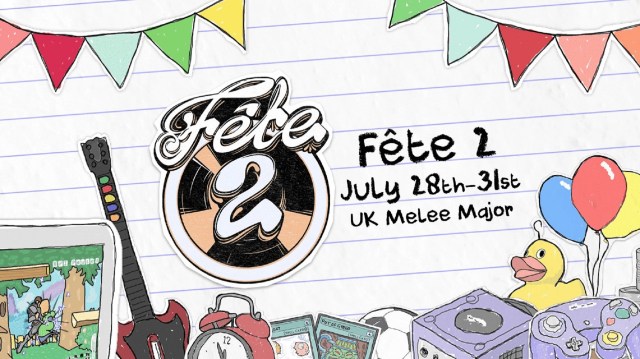 Provided by start.gg Fête will feature a number of side brackets and community gatherings alongside the main Melee event.

Europe’s next platinum event of the 2022 Smash World Tour is happening this weekend in Stoke-on-Trent, United Kingdom. The British major has attracted high-level Super Smash Bros. Melee players from the United States, Japan and all across Europe.

In addition, the tournament will feature a number of creative side brackets, from Yu-Gi-Oh to soccer and from Mario Party to chess. Here’s everything viewers need to keep in mind leading up to Fête 2 this weekend.

With Juan “Hungrybox” DeBiedma recently dropping out of Fête 2 Melee Singles, Masaya “aMSa” Chikamoto is currently the de facto No. 1 seed. After recently placing second at Double Down in the United States and first at Battlegateway #34 in Japan, aMSa is poised for another strong performance in the United Kingdom.

Won’t be heading to Fete next week, have some contractual obligations to take care of back home with Liquid

but I’m at Regen today + tomorrow with Top 8 commentary👍

hopefully someone can bring a melee setup here

most likely watch partying Fete / Smash Factor so see ya then 🙂 pic.twitter.com/nkFCQWdvZp

However, No. 5 seed Álvaro “Trif” García Moral also has a chance to win the whole tournament. Though he has not entered a major tournament since December, Trif has a favorable path to victory at this event.

In order to win, he would likely have to defeat Zaid “Spark” Ali, Aaron “Professor Pro” Thomas and either aMSa or Linus “Pipsqueak” Nordin. Trif holds lifetime winning records over all four of them, including a dominant 3-0 record against aMSa.

How to watch Fête 2

Fête 2’s spin-off events will start at 7 a.m. ET on Thursday and continue throughout Thursday and Friday. The first Melee side bracket will be the World Cup, a crew battle pitting players against others from different countries. This bracket will kick off at 10 a.m. on Friday.

Here's our finalised schedule for Fête 2! 🥳🗓️
It's full of fun through the whole weekend!!!!🤠 pic.twitter.com/v55UjsxFXa

Melee Doubles pools will begin at 6 a.m. on Saturday, followed by Singles pools at 8 a.m. The main Doubles bracket is scheduled to run from 12:30 p.m. to 5:30 p.m. that same day. Then, Melee Singles will resume at 6 a.m. on Sunday.

The tournament will conclude with Melee Singles top eight, starting at 2 p.m. on Sunday. While the tournament organizers have not revealed the full broadcast schedule as of writing, Beyond the Summit livestreamed previous iterations of the tournament. In addition, there will be a French side stream courtesy of Sylphe Gaming.