Everything to know about Día de Muertos 2022 in Pokémon GO 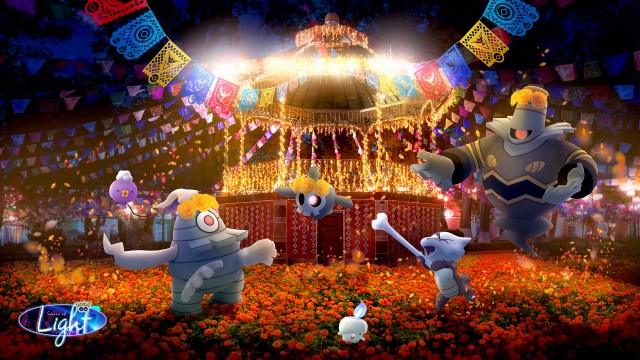 Provided by @PokemonGoApp via Twitter The Duskull evolutionary lines is getting a new look during this event.

The Day of the Dead is around the corner and people of Mexican heritage will soon celebrate their ancestors through this ancient Aztec tradition. Now, those who participate can celebrate Día de Muertos with a not-so-ancient tradition in Pokémon GO.

With special Pokémon, bonuses and challenges on the horizon, there’s much to look forward to during this day-and-a-half-long celebration. Here’s everything players need to know about the Día de Muertos 2022 event in Pokémon GO.

Join us in the celebration of Día de Muertos, a holiday observed in many parts of the Americas, by completing a Collection Challenge, catching Duskull wearing a cempasúchitl crown, and more!https://t.co/49IgNQvcdO#SeasonOfLight pic.twitter.com/IX4KIzkBMJ

The Pokémon of honor during Día de Muertos 2022 in Pokémon GO will be a costumed Duskull wearing a crown of cempasúchil flowers. It will retain its crown even after evolving into Dusclops and Dusknoir. Although somewhat rare, these Duskull have the chance to appear during the event, along with Drifloon and Yamask.

Meanwhile, other Pokémon will show up more frequently in the wild. All of the spotlighted Pokémon have even higher encounter rates in Latin America and the Caribbean. Here are the Pokémon players can expect to find more often:

Meanwhile, using Incense and Lure Models will increase the odds of finding wild Sunflora and Houndoom. Finally, the event will feature a number of special Raid Battle encounters. Costumed Duskull will appear in One-Star raids, while Five-star raids will feature Origin Forme Giratina and Mega Raids will feature Mega Banette. There will also be Three-Star Raids involving Dragonite, Sableye and Druddigon.

The Día de Muertos event in Pokémon GO will also introduce a number of special event bonuses. For example, both Lure Modules and Incense besides the Daily Adventure Incense will last for 90 minutes over the course of the event. In addition, players can expect to receive twice as much Catch Candy as they normally would.

Finally, new holiday-inspired cosmetics will come to the in-game shop during this event. They will include a decorative sugar skull face painting and a Day of the Dead t-shirt. Players can acquire this outfit for their avatar even after the event ends.