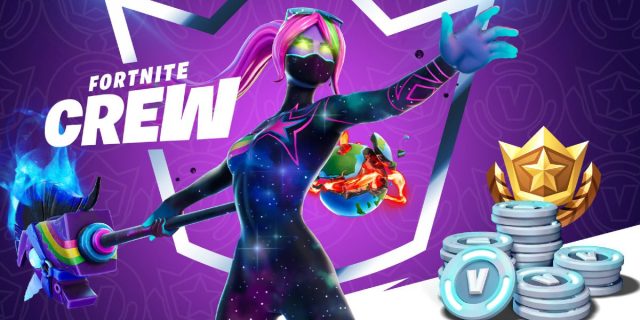 For several weeks rumors have been circulating about a potential subscription service model coming to Fortnite. Those rumors are real now that Epic Games has released details on Fortnite’s new subscription, called Fortnite Crew. For $11.99 a month, players will gain access to exclusive skins, gear, and the current season’s Battle Pass. The first skin coming to Fortnite Crew is Galaxia, the galactic-themed character in the trailer.

The service is similar to the Battle Pass system that Fortnite already has in place, but it’s for people looking to spend a little extra. The Battle Pass costs 950 Vbucks, or around $10, granting players several month’s worth of rewards in skins, V-Bucks, and other cosmetics. With Fortnite Crew, players can get an additional 1,000 V-Bucks each month automatically, which for many players will already be worth the monthly cost.

The other major bonus coming to Fortnite Crew is the exclusive Crew Pack. This bundle includes brand new, limited edition outfits and cosmetics that are only available to subscription members. For December, Crew members will get the Galaxia outfit, the Cosmic Llamacorn Pickaxe, and the Fractured World Back Bling. A pretty impressive bundle for the subscription service’s release. Epic Games also states that future Crew Packs will be announced in the month before release. Players will then be able to plan which months they would like to subscribe to.

It is important to note that if you plan on purchasing Fortnite Crew, you need to plan on what platform you want the rewards on. The subscription is tied to your “primary platform” until you choose to cancel it and cannot be transferred to another platform. Most rewards (excluding V-Bucks) will be accessible on any platform. Cancelling Crew is relatively easy and players can do it in-game.

Fortnite Crew is expected to launch on December 2, the same date that Chapter 2 – Season 5 launches.