ENCE, Entropiq and Virtus.pro proceed to Legends stage of the PGL Major

ENCE, Entropiq and Virtus.pro proceed to Legends stage of the PGL Major

They will join FaZe Clan, Copenhagen Flames and the winners of tomorrow's matches 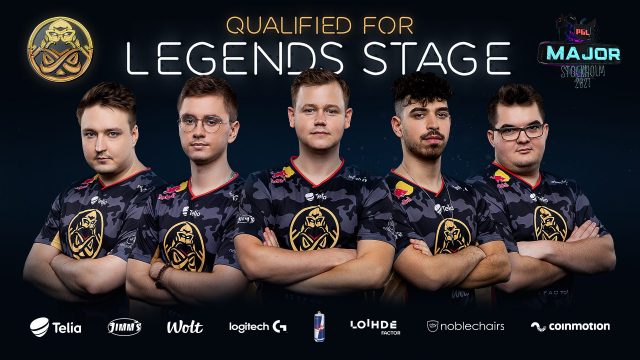 Provided by ENCE ENCE will progress to the Legends stage of the PGL Major.

ENCE, Entropiq and Virtus.pro joined FaZe Clan and the Copenhagen Flames as the five teams that have qualified for the PGL Major Stockholm Legends stage on Day 2 of the event. All three of the teams won a best-of-three to advance through the Swiss bracket system with a 3-1 match scoreline. It was the first attempt since reaching two wins for Entropiq and ENCE, while Virtus.pro had already tried and failed to qualify through a best-of-three yesterday in their match against FaZe.

ENCE ended their Day 1 at 1-1 after a win against the now eliminated GODSENT and a loss to FaZe. Yesterday, they beat MOUZ to put themselves at 2-1 and set themselves up to play best-of-three qualification matches. They were placed against BIG Esports. The series went the full three maps — Dust II, Mirage and Nuke — before the teams could be separated.

Entropiq followed a similar trajectory, ending Day 1 at 1-1 after a loss against BIG and a win against Astralis. Their Day 2 best-of-one saw them beating the Movistar Riders. Finally, their best-of-three match against Heroic, earlier today, also went the distance. They lost to the Danes on the Ancient, before beating them on Nuke and Mirage — the last in a dominant 16-4 stomp.

We are LEGENDS now! 🤩

Finally, Virtus.pro were able to secure a 2-0 Day 1 after wins against paiN Gaming and Movistar Riders. Their aforementioned loss to FaZe Clan prolonged their Champions stage and forced them into a match versus Team Spirit earlier today. As yet another back-and-forth match that went to all three maps, Virtus.pro won on Inferno, lost Game 2 on Ancient and then closed it out in overtime on Overpass.

BIG, Heroic and Spirit will all have one final chance to qualify tomorrow, Oct. 29, where a win in the best-of-three would propel them to Legends stage and a loss would send them packing. The winners will join the five teams that have already qualified from the Champions stage. Together, the eight surviving teams will join Ninjas in Pyjamas, FURIA Esports, Natus Vincere, Team Vitality, Team Liquid, G2 Esports, Gambit Esports and Evil Geniuses in the Legends stage, which starts Oct. 30. The 16 teams will battle it out in another Swiss stage, where only eight teams will advance to the Champions stage playoffs that run from Nov. 4-7.