The best EM2 loadout in Call of Duty: Warzone Season 6

The best EM2 loadout in Call of Duty: Warzone Season 6

A surging assault rifle in Season 6 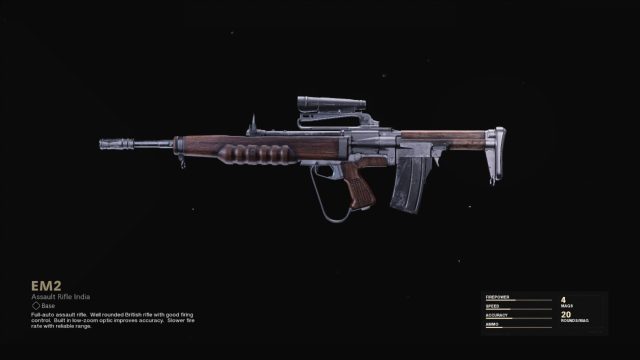 Call of Duty: Warzone Season 6 has yet to contain a true weapon meta, as multiple guns have surfaced as preferred loadout choices. When it comes to the assault rifle category, players are especially hard-pressed to find a consistent gun. However, a new EM2 AR loadout in Season 6 of Warzone might provide some players their next go-to weapon.

The EM2 was introduced a couple of seasons ago by way of Black Ops Cold War. When it entered Warzone, fans didn’t know what to make of it, as it had a daunting amount of recoil but a solid time-to-kill potential. Players enjoyed it using it for shorter-range gunfights but ultimately, the EM2 fell by the wayside due to other ARs being stronger at longer ranges. That has changed with a new top loadout for the EM2 in Warzone.

This loadout comes to the community by YouTuber JGOD, who’s known as the go-to creator for all in-depth Warzone weapon guides. He dives into the individual stats for each weapon and tells players what loadout they should be using for the recommended guns each season. He recently did the same for the EM2, which fans can see below.

The other three attachments are meant for support. The Axial Arms 3x is standard for Cold War ARs while the Field Agent Grip decreases recoil across the board. Finally, the 40 Rnd is a measure to ensure players don’t run out of bullets too quickly. This EM2 loadout has broken into the meta of Warzone Season 6 for good reason, as it makes the AR a beast at longer ranges.