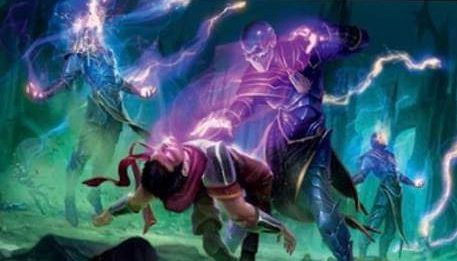 With the last week of War of the Spark spoilers commencing, we’re bound to see some of the crazier cards coming out. Today’s big reveal of Nicol Bolas, Dragon God comes with multiple cards that help Nicol Bolas conquer the Planeswalkers. With so many Planeswalkers running around, how will we ever deal with all of them? Fear not, for The Elderspell holds the answer to all of your problems.

Nicol Bolas has been amassing artifacts and relics in hopes of conquering all planes. Bolas’s grand ambition of becoming the most powerful being in the multiverse is near fruition. He’s acquired the Planar Bridge after having Tezzeret fuse with it and bring it to him. He’s gathered an army of Eternals from Amonkhet. The Immortal Sun is also in Bolas’s grasps, keeping the Planeswalkers stuck with him on Ravnica. He even has the legendary necromancer, Liliana, at the head of his armies.

Bolas has been attaining all of these key parts in hopes to finally cast the ultimate spell: The Elderspell. The Planeswalkers traveled to Ravnica after they were made aware of Bolas’s plan. Unbeknownst to them, they fell right into Bolas’s trap. With the Immortal Sun in place, Bolas plans to use The Elderspell to drain the spark from every Planeswalker. Will his grand scheme succeed?

The Elderspell is a sorcery that costs 2 Black mana. This will restrict its usage in Standard to decks able to handle this cost. While BB isn’t that crazy, building your mana base to ensure you have BB available can be a bit rough. Luckily, this card won’t often need to come down on turn 2, so you’ll have the time to set up.

The Elderspell is a hugely impactful spell. It allows you to destroy any number of Planeswalkers. This is different than destroying all Planeswalkers on the field, as it allows you to preserve the ones you want to keep and leaves your opponent exposed. It also allows you to quickly rack up loyalty counters on your own Planeswalkers, allowing you to get to their ultimate abilities that much quicker.

The Elderspell should be massively effective in Standard. Killing your opponent’s Planeswalkers for 2 mana is a big effect and I’m sure this will slot in somewhere with Esper Control as a way to deal with opposing Teferis and Kayas. Putting 2 loyalty counters on Teferi means ultimating him is closer than ever and his ability to untap 2 lands makes The Elderspell almost free. While I don’t think it’s a 4-of in any decks, The Elderspell will definitely find its way onto some tabletops. I expect to see these flying around everywhere in EDH as well. Who doesn’t want to cast The Elderspell for themselves?